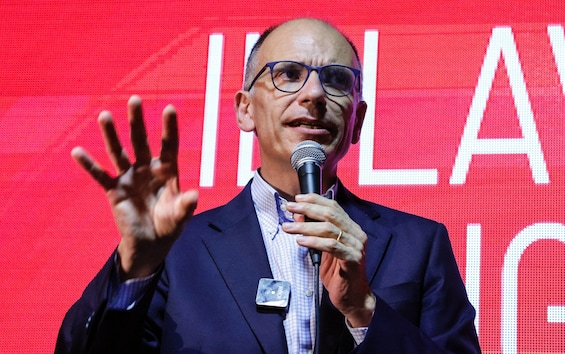 The secretary of the Democratic Party proposed abandoning the agreements because “on this point they oblige unanimously”, proposing to make pacts between states “without Hungary”. On the possibility of Giorgia Meloni becoming prime minister, “I think there will be very heavy repercussions” on the PNRR. On the deal with Calenda, “I think he made a profoundly wrong choice”

Leaving the European treaties on immigration: this is the proposal launched by Enrico Letta. The secretary of the Democratic Party, speaking on Rai Tre, explained: “It will seem strong from me, but we must leave the European treaties, because the European treaties, on this point, oblige unanimity. So I say: let’s make an agreement between the countries, without Hungary. Together with the others, we organize a form of widespread reception and relations with third countries, otherwise we will never be able to manage “the emergency, he explained. On the possible victory of the center-right, the leader dem said that” it is evidently a problem for our Country if the right wins. “If Giorgia Meloni is premier” I think there will be very heavy repercussions “on the PNRR, added the secretary of the Democratic Party. deeply wrong choice “. (POLITICAL ELECTIONS – LATEST NEWS)

“If the right wins, it’s a problem for the country”

“Obviously it is a problem for our country if the right wins,” said the secretary of the Democratic Party. “We saw it from the first election campaign proposals they made, which mean blowing up public accounts and the pact we have with Europe that gave us 219 billion euros in exchange for reasonable behavior “, added Letta.” For now Salvini and Berlusconi have competed for those who raised on the Flat tax, with a cost of 50-60 billion euros “. And on the possibility of Giorgia Meloni becoming prime minister, he declared “I think there will be very heavy repercussions” on the NRP. “Salvini said so: we will renegotiate the money from the Recovery and the Next generation Eu. There is no joking about this, because that choice is vital for our country “.

“I think Calenda made a profoundly wrong choice”

Speaking of the breakdown of the electoral alliance with Carlo Calenda, Letta said: “I think the Italians have understood very well, the first polls tell it but I must say that I am very confident in the wisdom of the voters who have seen how things went, there is not much more to say. “Then he added:” Above all, I want to turn the page, I will not continue to discuss this story because we vote on September 25 and the great risk that also due to these tears and these all personalistic choices , the Italian right is at an advantage “. On the competition with Calenda and Renzi, the former premier expressed himself in these terms: “I will never use the word enemy, they are political parties in a bitter competition with us. We find ourselves with two leaders who have made the legislature as elected with Pd, then, since they cannot imagine being in a party with others, they have decided to make a solo choice. Now I think they will go together and we will see. “Letta then assured that the Pd will do” its own election campaign, on things and concrete. We will say to the Italians: you have a dry vote, either Meloni and Salvini or us. This is the essential choice for the next five years, it is a choice on which the country plays the future. The alternative does not bring you nowhere”. And then he concluded on the subject: “I think Carlo Calenda made a profoundly wrong choice. Maybe I trusted too much, yes. But that’s how I am. It is not the first time that this has happened to me, by the way.”

On the possibility that the dem electorate asks for a return to the alliance with the Five Star Movement, the secretary is clear: “I don’t think so. Italy and which for us can not bring anything positive, in the polls we have only grown. Our electorate has understood that choice and has rewarded the straightforwardness, I believe in the straight line policy: “choose a path and go ahead clearly “.