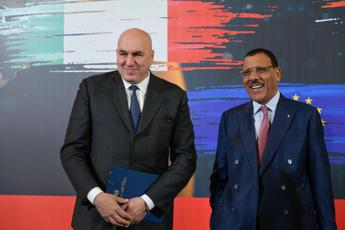 “There is a link between the trafficking of migrants and arms. All the weapons used by the terrorists come from Libya. We have understood the various types of trafficking, from drugs to weapons to migrants, we have proof. There is a connection between these trades. We have decided to fight these three trafficking in the Sahel”. This was said by Mohamed Bazoum, president of the Republic of Niger during the event ‘Italy, Niger. Europe, Africa. Two continents. A single destiny’ organized by the Med – Or Foundation at the Luiss Guido Carli in Rome.

“The terrorist groups present in the area – he underlines – have resources linked to these traffics, all of them have military equipment superior to our army. We can’t give our soldiers modern weapons but they have them. We must succeed in becoming superior to them. That is why cooperation with our European partners is important. A cooperation thanks to which we also have the formation of our armed forces”.

“The Europeans – observes Bazoum – have understood the security of the Sahel depends on the security of Europe. The Sahel is also the area in the world most affected by climate change. The countries of the Sahel have a threatened basic economy and it is no coincidence that young shepherds are now the most employed by terrorists. Natural resources have shrunk but population growth has increased.

“In the current context – he recalls – we do not have access to credit to invest in renewables. We need to change taking into account the needs of poor countries. We want to focus on agriculture, we have undercurrents, we need to find formulas that give us access to economic resources. We decided to industrialize agriculture to give people jobs and then focus on education and school by implementing necessary reforms to our school system. European companies must invest in our country so that terrorism does not have a life in our territories”.