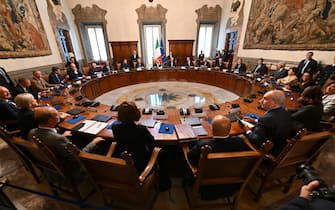 Turkey model. As it points out The messengerin the plan that the Italian government is preparing in view of the European summit of interior ministers scheduled for later this month, there is in fact a replica of what the EU he did to block the Balkan route at the request of Germany and gods Northern European countries overwhelmed by the wave of Syrian refugees

WATCH THE VIDEO: Migrants, the relationship between refugees and the population

A COMMON EUROPEAN RESPONSE – In this regard, there is the explicit request of the Italian government for a European regulation for NGO ships. “If this does not happen, we will have to go ahead with a national solution,” says a minister following the dossier. Translation: the reissue of the safety decrees signed in 2018 by Matteo Salvini, with maximulte and seizure of NGO ships

THE PRUDENT LINE OF GOVERNMENT – A solution, that of the security authorities, which however the government would like to avoid: at the Interior Ministry they continue to guarantee that Matteo Piantedosi “not working to any new regulatory text“. As Raffaele Fitto guarantees, “Italy has no intention of endangering diplomatic relations. There is no intention of changing rules every timebut to fix them for the first time, establishing the principle that the Italian coasts they are the border of Europe“. He therefore asks himself “a common European response to the problem of the migration crisis ”

Migrants, the relationship between asylum seekers and inhabitants in the rest of the EU

THE REQUEST FOR PIANTEDOSIS – At the top of the interior ministers, Crying himself it will ask for the allocation of huge resources on the Turkish model (to defend Germany from the Balkan route Turkey received 6 billion euros). The goal is to organize refugee camps in North Africa, especially in Tunisia and Libya, with the presence of humanitarian organizations and European military forces. “We will have to guarantee adequate reception conditions for migrants and security especially in Libya, where Russia destabilizes”, Says a government source

Migrants, what the European rules on aid and welcome say

PLAN – In these fields, they should be set up hotspots for the identification of migrants and the collection of asylum applications. A coordinated management of the EU would make it possible to “distribute equally, in various European countries, those who will be entitled to refugee status. Doing so would be interrupted trafficking in human beingsthe dramatic massacre of migrants in the waters of the Mediterranean would be put to an end and the provocations of NGO ships ”, argue some government officials

Migrants, Europe’s reception funds: how much they amount

THE ROLE OF NGOs – Precisely for NGOs, Italy will ask for a sort of European regulation or protocol. About this Crying himself yesterday signed a joint note together with colleagues from Greece, Malta and Cyprus. “The question must be resolved in Brussels: for us the ship that collects the refugees must head towards the Country whose flag it flies“, Declare a Palazzo Chigi

THE ROLE OF NORTHERN COUNTRIES – Since NGO ships are often from Northern European states, it is not easy to imagine a direct landing. For this reason, they let Palazzo Chigi know, “we could accept that migrants are disembarked in the nearest safe harbor. But in this case, the commitment of the countries that have ships carrying out the rescues to organize will have to be put on paper an airlift to bring migrants to their territory”

THE TARGET – The goal is one: “Every state must actually exercise jurisdiction and control over ships flying its flag“, they reiterate Rome, Athens, Valletta and Nicosia

A NEGOTIATION THAT IS INTENDED TO BE LONG – The negotiation does not look like simple. But, as declared at Palazzo Chigi, “Meloni, forte del great popular mandate, will enforce Italy’s interests. Firmly, but also with dialogue. European solidarity it’s not just a slogan ”

Migrants, the Interior Ministry prepares the squeeze on NGO ships