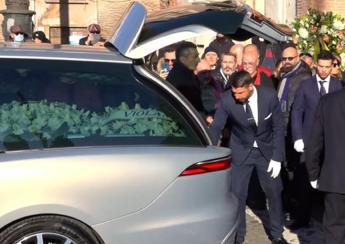 From Abodi to Totti and Donnarumma, many personalities from the sports world and not present for the last farewell to Sinisa

Over two thousand people gathered outside the basilica of Santa Maria degli Angeli e dei Martiri in Piazza della Repubblica in Rome for a last farewell to Sinisa Mihajlovic. Many fans of all his teams. The coffin left the Capitol around 9.40 and reached Piazza della Repubblica – partially closed to traffic for the occasion – at 10.15, followed by the Mihajlovic family. The crowd greeted the arrival with a long round of applause.

Many personalities from the sports world and not present from the minister for sport Andrea Abodi, to the mayor of Rome Roberto Gualtieri, from the president of Coni Giovanni Malago’ to the number one of the FIGC Gabriele Gravina. Also present was the blue coach Roberto Mancini and many of Mihajlovic’s former teammates.