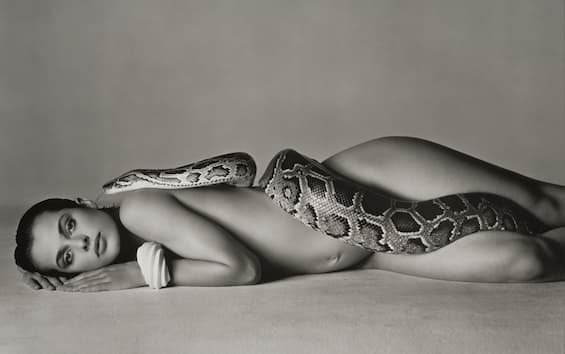 The exhibition promoted by Municipality of Milan-Culture, produced and organized from the Royal Palace And Skira Publisher in collaboration with the Center for Creative Photography and the Richard Avedon Foundation is curated by Rebecca Senf, head of the collection of the Center for Creative Photography and sees as main partner Versace and media partner Vogue Italia. The catalog is published by SKIRA publisher.

The exhibition will allow to deepen the innovative characteristics of Avedon’s art that made him one of the most influential authors of the twentieth century; on the one hand, it has revolutionized the way of photographing models, transforming them from static subjects to actresses protagonists of the set, also showing their human side, on the other hand, his surprising portraits of celebrities, in black and white and often of great trained, they are able to reveal the innermost psychological side of the person portrayed.

the collaboration between Richard Avedon and Gianni Versace

Avedon’s work for Versace is the representation of how that unique relationship that is sometimes created between designer and photographer can produce images destined for an area out of time, definitively beyond the circumscribed story they were originally intended for, linked to seasonality. fashion, to revolutionize the global narrative.

Thanks to his gaze, Avedon was one of the few photographers to interpret Gianni Versace’s avant-garde, illustrating the style and elegance of the Italian designer, as well as the radicalism of his fashion. Avedon’s abstract language acts in a compressed space that enhances the figures making them absolute and making the choreography of the bodies of some of the most celebrated supermodels of the time explode, in convulsive, syncopated movements, which highlight the shape and materiality of the clothes they wear, as in the case of the campaign for the 1993 spring / summer collection, starring Linda Evangelista, Christy Turlington, Kate Moss, Aya Thorgren, Shalom Harlow.

It is divided into ten sections – The Artist, The Premise of the show, Early Fashion, Actors and Directors, Visual Artists, Performing Artists / Musicians and writers / Poets, Avedon’s People, Politics, Late Fashion, Versace – is built around the two most characteristic figures of his research: fashion photography and portraits. The fashionable ones can be grouped into two main periods. The juvenile images, made before 1960, are shot “on location” and show models who play a role to evoke a narrative. Later works, on the other hand, focus exclusively on the model and the garments she wears. In these later photos, Avedon often uses a minimalist and uniform background, and most often portrays the subject in dynamic poses, using the fluid shapes of the body to reveal the construction, fabric and movement of the dress.

The route also offers a large selection of portraits of celebrities from the world of entertainmentactors, dancers, musicians but also civil rights activists, politicians and writers, including those of the Beatles (John Lennon, Paul McCartney, George Harrison, Ringo Starr), but also of Bob Dylan, Michelangelo Antonioni, Allen Ginsberg , Sofia Loren, Marylin Monroe, of the Dalai Lama and two of Andy Wahrol, where the father of Pop art americana decides to show her intimacy to Richard Avedon by exhibiting his gunshot scars, after surviving an assassination attempt.

One section is dedicated to portraits of the exponents of the American civil rights movements and to the members of the American Congress, the latter merged into the portfolio The Familymade in 1976 for the magazine Rolling Stonewhich documented theelite of US political power.

The exhibition is accompanied by a Skira catalog, with texts by James Martin, Donatella Versace, Rebecca Senf, Maria Luisa Frisa.