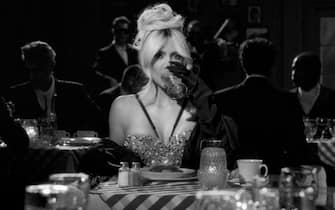 Very blond, a little bored and a little arrogant, she sits down at the table and eats a plate of spaghetti with sauce. The checkered tablecloth is there, the Parmesan and the glass of red wine too. In the black and white footage she opened the fashion show Dolce & Gabbana at the Fashion Week from Milan, Kim Kardashian try to give us the version of herself closest to the ‘dolce vita’ we have ever seen, following every Italian stereotype in detail

The two Sicilian stylists have chosen it for the Spring / Summer 2023 women’s collection. They asked her to sift through theirs archives of the past, from 1987 to 2007, and to choose his favorite pieces. Kim Kardashian, once a reality star and today one of the most influential celebrity-entrepreneurs in the world, has thus also arrived on the Milanese catwalks, debuting as curator for Dolce & Gabbana for the collection ‘Hi Kim!’

His presence in Milan was in the air. Never had there been one social campaign D&G so viral. One video after another to raise the public’s curiosity. Kim surrounded by paparazzi as she arrives at the Milan airport and while she eats ice cream which, annoyed by the flashes, she ends up squashing against the camera lenses. Kim rude diva that she throws on the ground the flowers that the photographers give her. Kim tired of her biting into a pizza in the limo

It doesn’t matter if from Sicily or from the icons dear to the duo, like Sophia Loren, Kardashian has little or nothing. Jeweled and made of cotton properly, it is credible, even in this role. She, she says, among her childhood memories still keeps the evening outings of her mother and manager Kris Jenner in Dolce & Gabbana dresses. Two dogs in the family, a black Labrador and a Chihuahua, were named just like the stylists

Ermanno Scervino at Milan Fashion Week between delicacy and roughness

In the game of power between social media – Kardashian has 300 million followers on InstagramDolce & Gabanna stop at 29 million – and in fashion, the star ‘famous for being famous’, already Balenciaga ambassadorperhaps the most iconic brand for today’s fashionistas, has now put its name on this collection as well

Milan Fashion Week, Etro looks to the origins with an eye to the future

Fishing among the ancient glories of the brand, Kardashian brought back to Milan corset dresses and garters, lace and suspenders, low-waisted skirts, fitted jumpsuits and tailored jackets, sequined minis and crosses at the neck. There is a lot of black, a little white, a little animalier. There are all the creations of Stefano and Domenico that it is not difficult to see them on

She herself, they say, had explained to the designers how much she admired their archives last May, when the two had dressed the Kardashian clan for the wedding of his sister Kourtneycelebrate a San Fruttuoso di Camogli and Portofino

Thus was born the idea of ​​bringing Kim to the Metropol of viale Piave in Milan. Given the huge resonance of the D&G wedding, the two designers then flew to Los Angeles and asked Kim to choose her favorite pieces. “We compared our choices and 80% were the same“, they say

One of the recurring themes in Kim’s style is the passion for mono-colorwith few prints and rather embellished with reflective and shimmering fabrics. Dolce and Gabbana admit that on the one hand the choice to use a single print and very few chromatic shades was a shock, on the other hand that the heart opened thinking about those dresses, the people who wore them, from Linda Evangelista to Monica Bellucci and Isabella Rossellini

On Thursday Kim arrived in Italy to follow the fittings of the models. “I had always seen everything from the outside and I had never experienced it, it was – he said meeting the press before the show – the most beautiful and creatively stimulating challenge”. Also stimulating, for Dolce and Gabbana, to have her with them: “she loves and understands fashion and has her own style”

As with the colors and prints, Kim’s presence also shines through selection of the models to whom he made to wear the chosen clothes. A great many were African or of African descent. Some, although few compared to the others, were ‘curvy’, as are those she chooses for her underwear brand, Skims

Kim – always known for her shapes but for a few months she has shrunk down to half of herself to slip intodress worn by Marylin Monroe when she sang ‘Happy birthday Mr. President’ at the Met Gala – she hopes her experience in fashion “will be remembered for the contribution to the inclusion of all sizes and all women”

“Also in this collection there are dresses that my mother, my sisters and even my daughters will want,” says Kim. The show was attended by the mother, sister Khloé and the four children with ex-husband Kanye West: North, Saint, Psalm and Chicago

Dolce and Gabbana, to the press, they defined Kim as “the muse par excellence”. His “confidence, independence, sense of style and sensuality” served as inspiration to the stylists for “the re-reading of their archives”. The reinterpretation of “these same legendary garments” – which “inspired Kim so often throughout her life and her career, making this moment a dream come true” – “manages to speak to so many different generations”

A moment from the show Hi, Kim!

A moment from the show Hi, Kim!

Kim Kardashian and Dolce and Gabbana