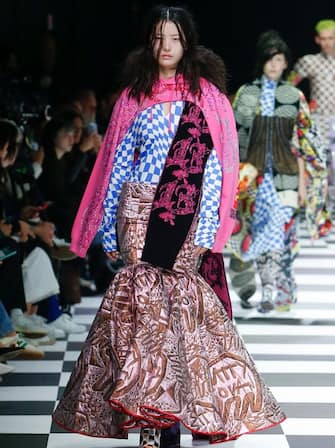 “In a dark time, the eye begins to see” says a quote from the American poet and writer Theodore Roethke. He was inspired by him Matty Bovanthe original desiner of YorkshireNorthern England, that Dolce & Gabbana they accompanied to the Milan Fashion Week of September 2022.

This is how Matty Bovan describes his creations for Spring / Summer 2023: “SHAPESHIFTER it is the exploration of visceral textures and colors that subvert and distort the body through chaos, resulting in triumphant identities ”.

Matty Bovan began his creative research by studying fashion at Central Saint MartinsL’London University of the Arts. “It was important for me to continue producing in the UK – he said – also in my homeland, Yorkshire, while enjoying the privilege of Italian craftsmanship”.

For his Milanese catwalk, Matty Bovan had the opportunity to recover a selection of corsetry, denim and accessories coming from the historical archives of Dolce & Gabbana which he then proceeded to “re-edit” with his style, shapes and color combinations.

Matty Bovan is the latest emerging talent to whom Domenico Dolce and Stefano Gabbana they have dedicated attention, making their seamstresses available and sharing their production resources.

Dolce & Gabbana, as creative supporters of Matty Bovan, took him to an industrial complex near the Navigli, in genus Hackneyto make explicit the reference to Londonwhose catwalks are often the theater for the English designer’s shows.

Emily Ratajkowski parades for JW Anderson in an arcade

“The colors, proportions and energy of Matty Bovan’s creations reveal the enormous research work and the creative process behind each of them. With him she was immediately there a special understanding: we are happy to be able to support Matty and the poetry of his vision ”, declare the stylists Domenico Dolce and Stefano Gabbana.

Sophie & The Giants presents her new single “We Own The Night”

The checkerboard motif, the embroideries and the clean lines unite corsets, jeans and worked shoes where as details you can find vintage telephone cables and sequins also made with recycled fabric.

“Handicraft and Handmade are at the center of my work, values ​​with which I and this iconic fashion house have a great affinity. There synergy with Domenico and Stefano during our recent meeting it was tangible, ”said Matty Bovan.

The British newspaper The Guardian, speaking of the Bovan show at Milan Fashion Week, recalls how the Italian designer duo Domenico Dolce and Stefano Gabbana decided to contact the rising English star after viewing his work on Instagram: an example of how social networks can also become vehicles of creativity, synergy and originality.

Milan Fashion Week: Diesel parades in front of the public at the Allianz Arena. PHOTO

Bovan reprinted the classics of Dolce & Gabbanalike the corset and the worn denim, and subverted them with its prismatic knitwear and hand-painted fabrics.

Milan Fashion Week: Etro looks to the origins with an eye to the future. PHOTO

Most of the collection was made in Yorkshire by local artisans. The recycled sequins come from Sustainable Sequin Companywhich is based in Manchester.

Milan Fashion Week: for Max Mara the coat also next summer (but light)

“It’s a natural way for me to work,” Bovan told the Guardian before the show. “I like give your clothes energy and soul. They cannot be mere factory products: they must have life “.

Dolce & Gabbana gave Matty Bovan carte blanche both from a creative and resource point of view. “It is incredible – said Bovan – that such an important company gives someone like me such an opportunity. For me and my whole group it was very interesting work on a larger scale“.

All the news about Dolce & Gabbana

Collaboration is also important for Dolce & Gabbana: it is the second time in this 2022 that Italian stylists have supported a brand that is becoming established in the fashion scene, the first was in February with the South Korean designer Miss Sooey.

Milan Fashion Week, flags and appeals against the war in Ukraine. PHOTO

Matty Bovan is one of many young British designers that capture the attention of the big brands already established, with a synergistic work, the cultural prestige of both nourishes and grows.

Bovan’s fashion show came the day after the appearance of Kim Kardashian on the Dolce & Gabbana catwalk. The American TV star also worked in the archives of the Italian brand, extracting a series of pieces from the golden period between 1987 and 2007.

For the Matty Bovan show they worked Katie Grand to the creative direction, Anita Bitton and Calvin Wilson for casting e Send Lennard as an executive producer.

All the news about Kim Karashian

The mammoths mirror cone hats were made by the legendary milliner Stephen Jonesconsidered one of the most radical and important of the twenty-first century.

Matty Bovan graduated from Central Saint Martins in 2015, winning the “LVMH Graduate Prize“. It has received funding from the project twice NEWGEN of the British Fashion Council and in 2021 he won theInternational Woolmark Prize together with Karl Lagerfeld Award for Innovation.

Previously Bovan expressed his love for the art of Italian fashion. “Italy is the capital of knitwear in the world – he said in an interview – and I have always felt similar in terms of textures and colors “.

The happy one collaboration of Dolce & Gabbana with Matty Bovan is yet another proof of the commitment, energy and constancy with which Italian stylists enhance the work of young Italian and international fashion designers.

Bovan has readapted Dolce & Gabbana’s creations relying, as is his style, on local craftsmanship from Yorkshire and England in general, rallying great English names of fashion.

Colors, proportions, energy and large dimensions of the garments are the distinctive feature of Matty Bovan, who married very well with the aesthetics and history of Dolce & Gabbana.

The latest news on Dolce & Gabbana

The Spring / Summer 2023 line designed by Matty Bovan in collaboration with Dolce & Gabbana is called “SHAPESHIFTER“,” change shape “in Italian, a name that brings together the re-creation process carried out on the fabrics and garments of the historic Italian brand by the English designer.