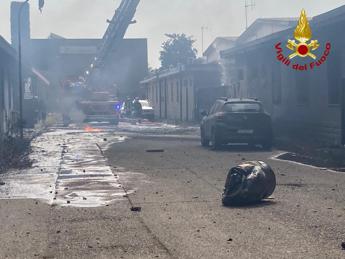 Six injured, two seriously with burns up to the third degree in different parts of the body

A great fire broke out in San Giuliano Milanese (Milan), in a chemical company which deals with the recovery of solvents and the disposal of hazardous waste (Video 1- 2. The flames broke out around 10.45 am.


6 people were injured. Two were rescued and immediately transported to hospital: one in red code at the San Gerardo di Monza and one in yellow code at the San Paolo. Their conditions are serious. In particular, the 43-year-old was transported to Monza and hospitalized for “second and third degree burns to the face, chest, lower and upper limbs”, reports Areu. The 56-year-old transferred to the San Paolo hospital (yellow code) was hospitalized for “first and second degree burns to the face.

For the other three, according to the firefighters present with 14 teams, hospitalization was not necessary.

They are also trying to find a person whose car is parked nearby but who has not yet been able to contact.

The cloud of smoke is now visible from over a kilometer away. On the spot 60 firefighters who are trying to contain the flames, still high. The Nbcr nucleus and airport vehicles were also present.

” As a precaution, citizens are invited to close the windows to avoid possible fumes and not to get close to the affected area”, writes the Municipality of San Giuliano Milanese on Facebook.

“There is a huge fire going on, with one developing black cloud of smoke, in the Nitrolchimica company of San Giuliano Milanese in via Monferrato – we read on the Arpa Lombardia website – A team of firefighters and the local police are present on site. Activated by the Civil Protection Operations Room at 10.35 am, the Arpa Lombardia emergency team is on its way to the scene. The atmospheric contamination specialist group, the chemical risk group and the Arpa weather forecast service were activated “.

“At the moment no further details are known about the dynamics of the accident and the related environmental impacts. The Nitrolchimica company is subject to the Integrated Environmental Authorization code 5.1 and deals with the disposal or recovery of hazardous waste with a capacity of over 10 Mg / day. Specifically, the company mainly carries out the recovery of organic solvents “, explains Arpa Lombardia.