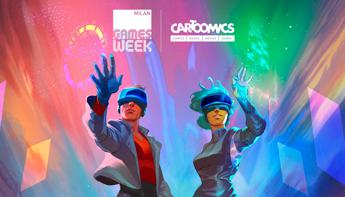 From 25 to 29 November at the Fiera Milano Rho

Fiera Milano and Fandango Club Creators have announced guests and calendar of the new edition of Milan Games Week & Cartoomics, which will be held from 25 to 29 November. The fair will extend over 4 halls for the first time. Waiting for fans will be guests such as actor and voice actor Troy Baker, and Humberto Ramos, an important author of some of the most beloved adventures of Spider-Man, which this year celebrates 60 years. On the Main Stage of the fair will alternate live performances by musical artists such as The Representative of Lista, Rocco Hunt, 13Pietro and, for the first time ever, on Friday 25 November the doors of the event will remain open until 11.00 pm for Black Friday. Night, with an ad hoc program with different entertainment contents. Among these there will be a special live episode of Dario Moccia’s Pub dell’Amico. On the same evening, the gaming pavilion will feature creators, youtubers, streamers and influencers such as Cydonia, Kurolily and others.


Competitive gaming enthusiasts will have access to the Esportshow pavilion, the home of national tournaments with competitions on League of Legends, Rocket League and Fortnite signed by PG Esports. In addition to the most important teams in circulation, the Esportshow pavilion will also host the Indie Dungeon area, in collaboration with IIDEA, which will give space to the Italian gaming industry by hosting numerous emerging development studios in a dedicated area. The space dedicated to the world of comics, games and cosplay will have two dedicated pavilions. In particular, Electric Town will be the reference point for lovers of comics, manga and board games, also thanks to the support of eBay, the Main Digital Partner of the event, which will host card tournaments, panels and meetings on stage. Finally, the Studios pavilion will bring the public into direct contact with the main groups and related communities dedicated to hugely successful series such as Star Wars, Assassin’s Creed, Avengers, Star Trek, Resident Evil and others.