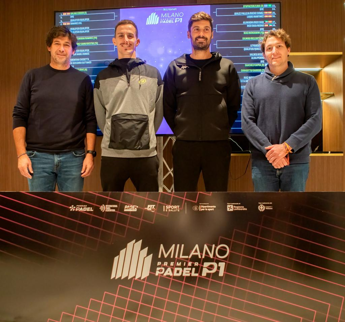 The strongest players in the world now know their way to the final. With the draw for the main draw, which took place at the Hotel Melià, the Milano Premier Padel P1 has officially begun, the last stage of the season of the circuit headed by the International Padel Federation (FIP) and supported by the Professional Padel Association (PPA). , the reality that brings together professional players, and by Qatar Sports Investments (QSI) scheduled from Monday 5 to Sunday 11 December at the Allianz Cloud.

The big names will all enter the scene in the second round of the 48-pair draw and are expected in Italy in the next few hours, at the end of the Major Premier Padel in Monterrey (Mexico), with quarterfinals, semifinals and final scheduled for this weekend. The draw, broadcast live on the tournament’s social profiles, was attended by among others José Catalan (Chief Sports Officer of the FIP), Guillermo Alcaide and Alejandro Villaverde (PPA) and the supervisor of the tournament Nicola Antonelli, but also two of the Italian players who received a wild card for the main draw, Lorenzo Di Giovanni and Daniele Cattaneo, to whom the draw reserved the Italian derby against the new national champions Marco Cassetta and Simone Cremona.

An all-blue challenge with a place in the second round up for grabs: for whoever wins, there is the challenge against Jeronimo “Momo” Gonzalez and Alejandro Ruiz, seeded number 6. Alejandro Galan and Juan Lebron, seeded first, await a qualified couple, while on the other side of the board are Paquito Navarro and Juan Tello, opposed in the second round to the winner of the match between Chillaron/Esbri and Santana/Suescun. Qualifications for the main draw began today at Lorenteggio 1947 and will continue on Sunday as well, the decisive day to complete the main draw with the last eight pairs joining the 37 already admitted by ranking and the three wilds card. From Monday, at 9, the Allianz Cloud will start to get serious: a single session is scheduled for the first day of the week, while from Tuesday the program will be divided into two, between the morning and the afternoon.