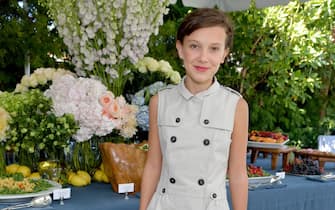 Eclectic, talented, original, Millie Bobby Brown is one of the main performers of Stranger Things, Netflix series broadcast this season with the fourth cycle of episodes (also visible on Sky Q and via the app on Now Smart Stick). The British actress, born in 2004, began playing Eleven (the little girl named Eleven in the original language show) in 2016 when she was only eleven. In the photocalls of the time she had short hair, a consequence of her character’s look

WATCH THE VIDEO: Stranger Things 4, the final trailer of Volume 1

As fans of Stranger Things, Eleven is a special child, she is endowed with paranormal powers since birth but has lived all her life as a laboratory guinea pig. In the first episodes of the series, the actress had to shave her hair, a shock but also a gesture that made her acquire a great awareness. To compensate for her androgynous look to her, she adopted a romantic, often floral look in those years

Prominent face of what is called Young Hollywood, Millie Bobby Brown immediately established herself in the world both for her skill and for her personality. Soon, she began to adopt a look made up of very personal touches that made her a special observer of her peers and of trade magazines such as Teen Vogue

Millie Bobby Brown’s personal growth matches that of her character. Like Eleven, the actress begins to prefer longer hair

Stranger Things 4: what you need to know about the new season of the tv series

2017 is a year full of style changes. For the Emmy Awards, where she is nominated for the first time for Best Supporting Actress in a Drama Series, the actress adopts a classic and elegant look, from the dress to the hairstyle.

In the fall, for the second season premiere of Stranger Things, the actress amazes everyone with a dark-toned look complete with a leather dress. The change is inspired by the dark and punk evolution of her character at that time on the show

Millie Bobby Brown is increasingly the protagonist of showbiz to the point of deserving in 2018 for Time Magazine a place among the 100 most influential people in the world. Here she is at the gala event in New York

New season, new look. Meet the actress in 2019 at the third season premiere of Stranger Things

The best TV series to watch in May 2022. PHOTOS

Another striking look for the arrival of Strangers Things 3. By now Millie Bobby Brown can afford to switch from more rigorous outfits to more eccentric ones

After a long pause, partly due also to Covid, Stranger Things is ready to return to streaming with the first part of season 4. The interpreter of Eleven, who turned eighteen in February 2022, showed fans her latest look: long blonde hair with bangs. For the premiere in New York of the show, the actress, increasingly attentive to the world of fashion, wore a customized Louis Vuitton creation