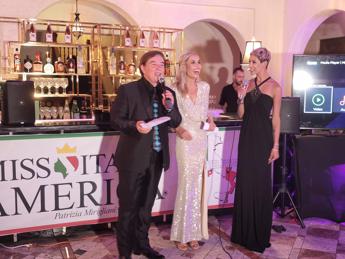 Great success for the Miss Italia America presentation gala in the USA on 30 July 2022 in Miami Beach. Official start of the contest so dear to Enzo Mirigliani, historical Patron of the Miss Italy event that launched stars like Sophia Loren. To win the crown of Miss Italia America, girls of Italian American origin from all over the United States, will compete in various tests during all the intermediate stages that will cross the country up to the final to be held in January 2023 in Miami. During the evening Monica Marangoni, beloved international face of Rai Italia, together with the Artistic Director and world-renowned DJ Roberto Onofri, presented a competition full of important innovations aimed at enhancing women, already desired in the Italian edition by Patron Patrizia Mirigliani.


The search for the Queen among Italian Americans this year will in fact extend to all colleges where a parallel competition will be held via social media. On Tik Tok will be presented the video applications of the students who like on like will climb the ranking up to the Miss College band, a title that thanks to this virtual crystal slipper, will make the winner jump directly to the final. The rumor is spreading throughout the American campuses, where the race to vote for the girl who has to represent her college will be unleashed among the radio, student media and sororities. Each follower of Miss Italia America’s Tik Tok profile will be able to vote for their favorite from 1 to 15 October. The submissions of the winners of each college, from 15 to 30 October will collect new likes to win the bracket. A party full of beauty, glamor and news like today’s Italian-American girls who, grown up with 2.0 technology, will finally be able to register for the competition thanks to the brand new app presented during the event by Marco Ibrahimsocial media manager of Alba Group producer of Miss Italia America together with Italian Television Network.

Miss Italia America also has an important solidarity purpose given that the event will donate part of the proceeds of two special collections available on the NFT platform of Miss Italia America to the non-profit organization Ebano. At the end of all the selections, which will take place in places representative of Italian glamor and excellence, the competitors will remain in 24. Among them also the winner of Miss Italy America Canada who will compete for the coveted title of Miss Italy America. Together with the beauty and sympathy of the two brilliant hosts, the splendid Dalila Krizia Mendolar took to the stage, representing the world of fashion for Miss Italia America who will take care of the looks and choreographies of the contestants.

The event that began at the setting of the sun on the beaches of South Beach was enriched with a bright starry sky starting with the representatives of the Comites of New York and the Chicago Chamber of Commerce and the very illustrious participation of the Honorable Fucsia Nissoli. It is in fact with the energy of all the important Italian brands present on American territory that Miss Italia America continues to spread the unmistakable style of a country that has made America fall in love with. Accompanied by the official opening of the event sung by the tenor Andrea Del Principe, the guests to the party toasted this renewed partnership. The “Made in Italy” guest of honor at this grand gala will accompany the contest to elect Miss Italy America 2022 in all its most prestigious forms.