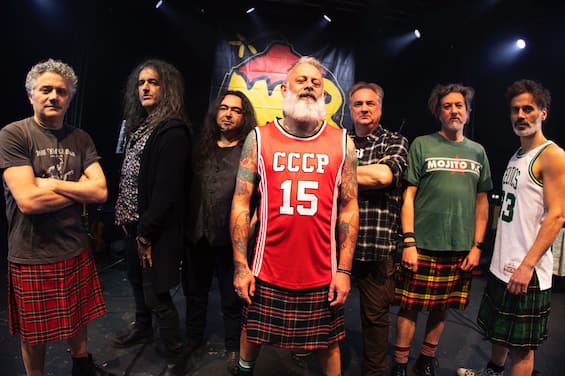 The club tour of the Modena City Ramblers it’s getting closer! The first date at Hiroshima Mon Amour in Turin on Friday 18 November is sold out and reservations for the date of Friday 30 December are sold out. After the Turin date, the band will continue the November 25th at the Live Music Club of Trezzo sull’Adda (MI)the November 26th at the Padua Hall, December 3rd at the VOX Club in Nonantola (MO)the December 14 at the MONK in Romethe December 15th at Duel Club in Pozzuoli (NA)the 17 December at the Vidia Club in Cesena (FC)the 23 December at the Molloy Dairy in Brescia and the 30 December at the Teatro degli Animosi in Marradi (FI). Tickets for the tour dates are available on the official circuits.

With this special club tour the band continues the celebrations of partisan notes, gold record in 2005 and an important step in their rich recording career. Out of print for years, the record was re-released in 2020 on vinyl and CD (Modena City Records/ Universal) exactly 15 years after the first release, but due to the pandemic, the planned support tour could not see the light. Only from April of this 2022 will the album be able to begin breathe freely: the Ramblers will finally be around Italy to celebrate him worthily together with his historic songs. The lineup will be very particular, with a focus on the most partisan material, but also drawing from the rest of the band’s discography, which has always been linked by a red thread to the themes and values ​​of the Resistance. Naturally, the classics of the repertoire of the Delinquenti di Modena cannot be missing: therefore a series of concerts is expected in which the party, the desire to share and the pleasure of being united in the Big Family Modena City Ramblers. The Modena City Ramblers were born in 1991 as an Irish folk group, always in love with the music and traditions of the Emerald Isle. From there thirty years studded with successes, both from a recording and live tour point of view, in Italy and in Europe.