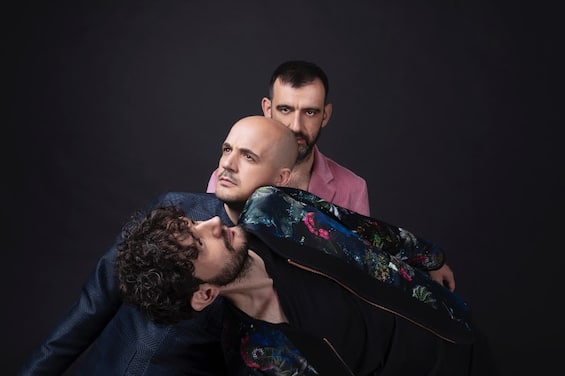 For once it was the stars that were envious of the earthly light. Sascha Ring, Gernot Bronsert And Sebastian Szarzy from the Valle d’Itria they illuminated the universe. Other than Elon Musk, these three friends bring you into space with their music and their visuals, sequences of powerful, evocative, cathartic images. Six thousand people (sold out!) Have joyfully invaded Locorotondo to attend the performance of Moderat in the context of Viva! Festival. In the hotel, at the Chiusa di Chietri, we met to talk about music and life.

Let’s start with your participation in Viva !: you brought five thousand people to Locorotondo.

It’s easy if Sascha dances, Sebastian plays the harp and Gernot is naked (laugh, ed). Plus we scream but don’t say anything. We brought in the new songs, the old ones and a lot of visuals. We are happy to be in Italy!
The single More Love is inspired by Botticelli’s Venus: how much does art inspire your music?

For us, creativity is traveling, it is that curiosity that leads to discovering art. Particularly at this stage of life because the album More D4ta was born during the pandemics and not being able to move we reviewed what is around us. Basically we used to travel, now we have rediscovered many places in Berlin. It is nice to rediscover the value of local life without flying a deejay from one part of the world to another.
Breathe the life into the trees it sounds like an ecological message: do you think we are doing enough to save the planet or are we still on words?

The verse you quoted is not necessarily related to the planet and ecology, it is inspired by this woman who dances alone and has lost the sense of time; nature is a present but not important element in the piece. We write the sentences several times that then blend, blur and lose their meaning, giving space to free interpretation.
She keeps on dancing by the fire The lost you love: what has this woman lost? And is dancing around the fire an exorcism to the past or is it a party?

You know we come from techno and it’s normal to hang out in a genderless world. The dancing woman conveys a sense of security in an inclusive piece. In other genres the woman who dances sends different messages and in writing we thought of our wife, an observed woman.
In More d4ta for the first time, in my opinion, your music is also fun: has anything changed in the relationship of three old friends?
No one actually told us we’re funnier, you’re the first. On the other hand, we have received many comments related to the fact that it is perceived as a darker and darker album, made in a pandemic period.

Has the pandemic affected you?

We tried not to reflect the historical period in the music but we are human beings. Our way of creating has two phases: in the first everyone is in his bubble and everyone makes his files then we compare ourselves. It was a godsend to work on an album while the world went crazy, crushed between fear and tension.
In short, the bubble was saving.
Composing was isolating oneself from reality, an intense and constructive moment. The pandemic was also particular because it triggered an almost positive confrontation between boarding schools as they were all hamsters on the wheel. If you think about it, you didn’t have to do anything at the time. But we say that composing is important. We had met just before the pandemic after a virtually contactless period and as soon as we started the creative process we were immediately stuck. Then there is another element that has changed our relationship: before Sascha was the only single in the group and had a free life, now she has a partner and a child and therefore understands the rhythms of family life. We have rebalanced.
Is it difficult to be mainstream but not afraid to experiment? In the album there are Berlin danceflor moments but also but also extreme experimentation as in Numb Bell.

When we create we don’t start from a mainstream or experimental idea. The concept is that each piece is experimentation but music in general is. We don’t start with an idea, we are instinctive, we follow what we want to do. Today we say enough techno, it bores us, there is a different breath in our music. But what is normal music then?
What is happening in the Apparat and Modeselector projects? And what will happen between now and the end of the year in the Moderat universe?

We have no answer. Between the first and the second album we had more defined boundaries while now it’s a step by step. We are now on tour as Moderat and the other projects are frozen. So at this stage we are focused on Moderat but obviously it is not definitive. It is that we have learned to live more in the day.