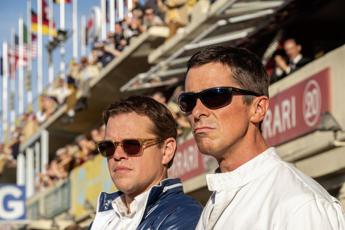 “Champions’ lives” concludes, the cycle of three films premiered on Rai 1 and simultaneously on RaiPlay, dedicated to the world of sport and more particularly to the human side of sporting achievements. A proposal designed to accompany the World Cup in Qatar and aimed at an audience of sports lovers, but not only Tomorrow, at 21.25 on Rai 1 “Le Mans ’66 – The Great Challenge” by James Mangold, with two Hollywood giants, Matt Damon and Christian Bale, in the role of the protagonists. The film tells a true story linked to the 24 Hours of Le Mans, one of the most famous and noble car races in the world. In 1966 the American engineer Carroll Shelby and the British driver Ken Miles were hired by Ford to produce a car that is able to compete with the rivals of Ferrari, always winners of the competition. Miles, at the wheel of the vehicle, achieves record times, but due to his difficult character he is frowned upon by the bigwigs of the company. Speed, intelligence, danger: the film won two Academy Awards, for editing and sound editing.

A romantic comedy with a pinch of suspense is the proposal for Rai 2 prime time, tomorrow at 21.20, in absolute premiere: ‘A kiss before Christmas’. Ethan Holt, a real estate executive, is married and the father of two teenagers. On Christmas Eve he discovers that he will not get a promotion, because his way of conducting business has been deemed too proper by his superiors. However, the magic of Christmas relieves Ethan of his frustrations: his desire for a different life takes shape, making him wake up in a totally different world. He is no longer married to his wife Joyce, has two children, and is number one in his company. If he wants his life back, he’ll have to prove to Joyce that he is the man of his life. But there’s only time until Christmas… “Life is made up of our choices” is the claim of this TV movie: the classic Christmas theme of another possible identity has given rise to great classics such as “It’s a Wonderful Life” by Frank Capra or “The Family Man”, with Nicholas Cage. A kiss before Christmas, by Jeff Beesley, interprets the plot linked to the tested ploy in an original way, thanks to a willing work of screenplay and acting, and to the presence of James Denton and Teri Hatcher, actors much loved by the audience of “Desperate Housewives ”.

Libero is a passionate second-hand book seller and Essien is an immigrant boy who has been living in Italy for a few years. The friendship between the two passes through the books that Libero lends to Essien and the complicity between them grows in parallel with the emotions that each of these novels can give. Essien meets the West through his literature, Libero fulfills the meaning of his name trying to make Essien a free man. A story told by Claudio Rossi Massimi’s film “The right to happiness”, broadcast tomorrow at 21.15 on Rai 5. In the cast Remo Girone, Corrado Fortuna, Didie Lorenz Tchumbu, Moni Ovadia, Pino Calabrese.

On Rai3 ‘Report’ – On Rai2 ‘Restart-Italy starts again with you’

Tomorrow at 21.25 on Rai 3, the opening investigation of Report is “The silent pandemic” and does not talk about Covid. Giulio Valesini and Cataldo Ciccolella in collaboration with Norma Ferrara explain that with bacteria, which swarm everywhere inside and outside our body, we live in a sort of armed peace and the balance is now about to be interrupted. The inappropriate prescription or excessive use of antibiotics, the poor hygienic conditions of hospitals, the release of contaminants into the environment: thanks to our mistakes, bacteria have trained and strengthened. In the same year that Covid took its first steps, over 1.3 million people died worldwide from antibiotic-resistant bacterial infections. Estimates predict 10 million deaths a year around 2050. Report investigates the role of doctors and pharmaceutical companies: there is a national plan against superbugs that has not been funded for years. And when 40 million euros arrived to get him started, the Speranza-led Ministry of Health was unable to spend it. Followed by “Cars that drive themselves” by Michele Buono in collaboration with Edoardo Garibaldi: why own a car if an app is enough to use it? In Parma the guys from Vislab, a spin off of the University, had already created an autonomous driving system twenty years ago. They were bought by an American multinational, Ambarella, and they presented a new model at the most important fair in the sector, CES in Las Vegas. Even if research and experimentation remain in Emilia-Romagna, the patents will no longer be Italian. Finally, “The Gas War” by Edoardo Garibaldi and Walter Molino in collaboration with Goffredo De Pascale: since the outbreak of the war in Ukraine, the price of gas has begun to rise to almost €350 per megawatt hour, figures more than fifteen times higher than the average prewar. As a result, electricity and gas bills for businesses and households have skyrocketed. Report spoke with Arera, the Italian energy authority, which was able to view the import contracts of the multinationals hitherto considered as industrial secrets. Who is making money?

Last appointment of the year before the Christmas break with the economic analysis of “Restart-Italy starts again from you” broadcast tomorrow at 11pm on Rai 2 with Annalisa Bruchi and Aldo Cazzullo, deputy director of Corriere della Sera and Mario Sechi, director of the Agi. Among the guests of the episode: Claudio Durigon, Undersecretary of the Ministry of Labour, Francesco Boccia, Senator of the Democratic Party and responsible for Regions and Local Authorities and Francesca Re David, Confederal Secretary of the CGIL. Speakers Peter Gomez, director of Ilfattoquotidiano.it and Marilù Lucrezio, Rai correspondent from Brussels. In the first part of “Restart”, Europe is at the center between Qatargate which is expanding and the maneuver which inflames the squares with protests and new strikes. From work to pensions, Italy is not a country for young people (or even for the elderly): recent graduates are leaving in search of a future job and retirees with low incomes are leaving, looking for living conditions abroad best. And finally, what Christmas will it be? How is inflation changing Italian spending? What do we learn to give up? The question will be for Maura Latini, CEO of Coop Italia; she has a long experience in a cooperative where she started starting from the points of sale, climbing all the positions up to becoming CEO.

Darius Arya explores the undergrounds of Camerano and Osimo in the episode of “Under Italy”, broadcast tomorrow at 20.20 on Rai 5. Both cities in the Marches have a particularity: two underground cities develop in their subsoil, made up of caves dug out of the sandstone starting from 2,500 years ago and “completed”, as we see them today, in 1800. Environments of very high and refined architecture, rich in bas-reliefs, friezes, domes and vaults whose intended use is still uncertain: from residential to that of food preservation, to ritual and defensive purposes. In Camerano, in particular, Darius Arya – immersed in water up to his knees, narrow in damp and dark tunnels – will also explore the “Devil’s Hole”: a hypogeum that was part of the Roman aqueduct which – in all probability – reached as far as Ancona.

It is the story of Fabiano Popia from Valsinni (Matera), founder of the first Aido group in Basilicata after the tragic death of his daughter, that opens the week of “New heroes”, the original format in collaboration with the Quirinale, broadcast from tomorrow to Friday 23 December at 20.15 on Rai 3, with the off-screen voice of Veronica Pivetti. It continues with Gabriele Salvadori, a firefighter from Livorno, who during a mountain bike race in which he participates personally, saves an athlete who has fallen into a cliff; Cristina Zambonini, also known as the “girl with three hearts” who underwent two heart transplants in ten years and now helps others thanks to her non-profit organization ”Cuori 3.0”; Giovanni Buttafava, the young volunteer of the Red Cross of Piacenza who, at the age of just 16 in the midst of the Covid emergency, was given the task of coordinating, throughout the province, the home delivery service for medicines and basic necessities for the most fragile forced into the house by the Pandemic; and Egidio Marchese, a Paralympic athlete of Calabrian origin who has been involved in sport for years as an opportunity for social inclusion and founder of the first integrated gym for disabled and non-disabled people in Italy in Valle d’Aosta.

Tomorrow is an important stage for L’Eredità, the longest-running game show on Italian television. The 1000th episode is aired with Flavio Insinna conducting. Evening after evening, every day at 18.50 on Rai 1, Insinna, in its fourth year of running, has now established a special relationship with the audience of the flagship network. Even in the thousandth episode, his joy, challenging questions, professionalism and constant and daily commitment will not be missing, together with the sympathy of the Professors and the many games that follow one another in the program, produced by Entertainment Day Time and which keeps everyone glued to the television. The Legacy is a format that has entered the hearts of Italians, with its 4933 episodes it has invited more than 25,000 competitors to play. In rounds of seven each night, the challengers, with an average age of 37, face a journey that ends with the Stake Champion attempting to win the jackpot in the final game of The Guillotine. The unmissable appointment that every evening also challenges the public from home is the final step towards success for many: among the many participants in the game show, Guido Gagliardi is the competitor who won the most (with €316,250.00 and 5 guillotines guess what), while Massimo Cannoletta is the competitor who has participated in the most consecutive episodes (fifty-one episodes with eight guessed guillotines and €280,000 in prize money). L’Eredità was created in Studio 4 of the Fabrizio Frizzi television studios (formerly Dear) in Rome.

Thirty years ago, on 19 December, a great “inventor” of words disappeared, perhaps the most important sports writer and “narrator” that Italy has ever had: Gianni Brera, journalist by profession. Rai Cultura dedicates to him the doc signed by Daniele Ongaro and directed by Graziano Conversano “Gianni Brera. The free of the Bassa “, re-proposed tomorrow at 15.00 on Rai Storia for the “Italians” cycle. The doc tells the adventurous life of Gianni Brera, with the help of the journalist’s television interventions and the testimonies of those who knew him and worked with him: Gian Paolo Ormezzano, Gianni Mura, his son Paolo Brera, Claudio Rinaldi, Andrea Maietti and Sergio Giuntini. And there is also – together with other witnesses, such as the footballer Giovanni Lodetti, the chef Mario Musoni and the winegrower Lino Maga – a small “pacciada”, or rather the dinner that Brera prepared every year with his company of fellow journalists, writers, footballer friends where we ate and drank talking about sport, politics and music. A native of San Zenone Po and always linked to the Bassa Pavia area, so much so that he defined himself as “the Prince of Zolla”, Brera began writing about sports at a very young age and soon established himself as one of the main signatures of Italian sports criticism, arriving at just 30 years of age , in 1949, to direct the Gazzetta dello Sport. The innovative writing of Brera combines a strong technical preparation with an unmistakable literary style, rich in historical, ethnological, linguistic, food and wine references. His football theories on the Italian game, based on the application of the bolt and the counter-attack, are brought to international success by the AC Milan coach Nereo Rocco, while his prose, which he develops on the pages of the Day, the Guerin Sportivo and of the Republic, brings the epic-sport story to the rank of great literature. The sign of Brera in the Italian language is also found in the numerous neologisms devised to describe the game of football: terms such as midfielder, libero, melina, goleador, pretactica, are still currently used in sporting jargon and in everyday language.