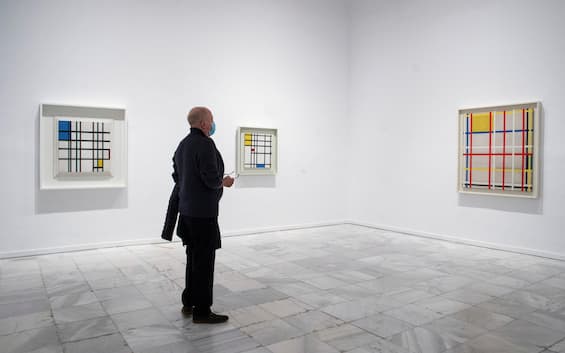 A Mondrian painting has been hung upside down in various museums for over 70 years and no one has ever noticed. The art historian Susanne Meyer-Buser discovered this, but she also suggested that the painting continues to be exhibited in reverse.

The history of the opera

The work is from 1941 and shows a complex intertwined network of red, yellow, black and blue adhesive tapes: it is called New York City I, and was exhibited for the first time at the MoMA in New York in 1945, but since 1980 it has been in the North Rhine-Westphalia art collection in Dusseldorf. It is probable that the painting, perhaps as early as 1945, was inadvertently exposed in the wrong way and that the error remained.

The discovery was made during preparations for a new exhibition on the Dutch painter, on the 150th anniversary of his birth. Currently the painting is exhibited with the multicolored lines that thicken in the lower part. But in a photograph of Mondrian’s studio taken shortly after his death in 1944, the painting is on one of his easels, with the denser parts of the ribbon lines at the top. “The thickening of the grid should be high up, like a dark sky,” explained Susanne Meyer-Buser, the curator of the exhibition. “When I pointed this out to the other curators, we realized it was really obvious. I’m 100% sure the image is the wrong way around.”

Drawbacks of this kind are not uncommon, especially with abstract works. In 1961 the Museum of Modern Art in New York exhibited Matisse’s Le Bateau upside down for 47 days until someone, more attentive, pointed out the mistake. Even in Dusseldorf the Mondrian will likely remain upside down: Meyer-Buser explained that it was hung upside down for so long that it was somehow accepted by historians, so correcting its positioning would almost be an interference: “If I turn the work of art, I run the risk of destroying it “.