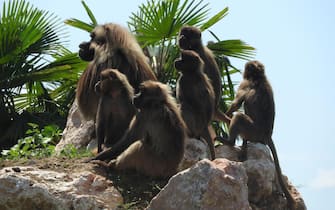 Climate change and deforestation may have drastically changed the habits of monkeys and lemurs. These animals were in fact observed by a team, led by Timothy Eppley, as part of a study, published in the journal Proceedings of the National Academy of Sciences, conducted by scientists from the San Diego Zoo Wildlife Alliance (SDZWA) and 123 other institutions. of research, including La Sapienza di Roma

The researchers, examining over 150,000 hours of observations of 15 species of lemurs and 32 of monkeys, in 68 different sites in the Americas and Madagascar, have noticed that they are found less and less frequently in trees and more often on the ground, where the risks for their well-being increases due to lack of food and shelter

“Our work stems from an informal discussion between colleagues – says Eppley – we have noticed that some populations of arboreal primates tend to spend more and more time on the ground”. Scientists estimated the influence of ecological factors, including potential human-induced pressures and / or unique traits of different species.

According to the survey, groups that consumed less fruit and gathered in large social groups were more likely to come down from the trees more frequently. These traits, the scholars note, could act as a pre-adaptation

Furthermore, the authors report, primates that lived in warmer environments were more likely to adapt by using thicker soil. With worsening climate change and shrinking tree habitats, primates who eat a more generalized diet and live in larger groups may more easily adapt to a terrestrial lifestyle.

“It will be necessary to evaluate the behavior of other species – observes Luca Santini, of the University of Rome La Sapienza – but in general our work could indicate that the human presence, which often represents a threat to primates, can interfere with the natural adaptability of the species to global change ”

“The transition from an arboreal to a terrestrial lifestyle – concludes Giuseppe Donati, of Oxford Brookes University – has already occurred previously in the evolution of primates, but the rapid changes in temperatures observed due to climate change could represent a serious threat to these monkeys ”

“Our results – says Luca Santini of Sapienza University of Rome – suggest that human presence, often a threat to the conservation of primates, can interfere with their natural adaptability to global change”

In the past, situations of transition from an arboreal to a terrestrial lifestyle had already occurred, but the concerns that led the researchers to start a study of this magnitude arise in the rapidity with which climate changes and human interventions occur: this situation requires, for less adaptable species, rapid and effective conservation strategies to ensure their survival