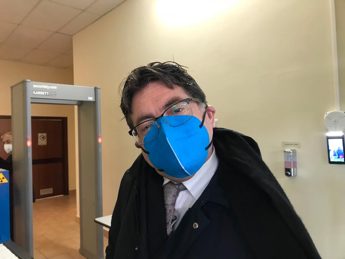 (from correspondent Elvira Terranova) – A new twist in the Montante trial in Caltanissetta, resumed this morning after the Christmas holidays. At the beginning of the hearing, the civil party lawyer of the magistrate Nicolò Marino, the lawyer Ugo Colonna, announced that he had filed the revocation of the civil action for his client, Nicolò Marino and his children. In this way, in all likelihood, one of the impediments to Marino’s appointment as Assistant Prosecutor of Caltanissetta could be eliminated. In recent weeks, after the appointment of Marino as adjunct, in fact, the hypothesis of transferring the Caltanissetta trial against the former powerful president of the Sicilian industrialists Antonello Montante to that of Catania had been mooted.

A real jolt that had been caused precisely by the appointment of the assistant prosecutor of Caltanissetta, Nicolò Marino, the civil party of the trial. The choice had been made official in December by the Prosecutor of Catania Carmelo Zuccaro who had designated, with a formal provision, the additional Prosecutor of Catania Agata Santonocito and the prosecutors Valentina Margio and Luca Volino “for the treatment of the trial” and for “the preparatory examination of the copious procedural file”.

Even if on December 22 there was a new jolt. Because the first section of the Regional Administrative Court of Rome has suspended the effectiveness of the provision of the CSM on the appointment of Nicolò Marino as assistant prosecutor of Caltanissetta, currently a investigating judge in Rome. The Tar, deciding on the appeal, aimed at the annulment of the deed, presented by the deputy prosecutor Pasquale Pacifico, in service at the Dda of Caltanissetta, set the council chamber for May 10, 2023. And on December 30, the investigating judge of the court of Rome Nicolò Marino challenged the Council of State’s decision with which the Lazio TAR suspended his appointment as deputy in Caltanissetta after the appeal presented by Pasquale Pacifico, current substitute in the same court. In the judicial context, the president of the seventh section of the Council of State, Marco Lipari, highlighted that “in the comparative assessment of the opposing precautionary requirements, the interest, common to all parties, of a prompt determination of the merits before the TAR prevails”.

The administrative judges of the first instance, in suspending the appointment of judge Nicolò Marino, set the council chamber for May 10 but this “does not cause an irreversible prejudice to the reasons” of Marino, represented by the lawyer Nicolò D’Alessandro. The precautionary discussion in the Council of State is set for the council chamber on January 17th. And in the meantime, the President of the Court has postponed the hearing to next January 30th.

In addition to the former champion of the anti-mafia, sentenced on appeal in another section of the trial to eight years in prison for corruption, the defendants are also representatives of the police forces, entrepreneurs and politicians, including the former president of the Rosario Crocetta Region and the current governor Renato Schifani. In one of the last hearings the President of the Court, Francesco D’Arrigo, had decided to unify the two parts of the Montante process. Which has become a sort of ‘Maxi-trial of Caltanissetta on the ‘Sistema Montante’. A decision by D’Arrigo, which arrived despite the contrary opinion of the prosecution and defense of the two trials who fear an extension of the time for the sentences.

In the ‘procession’ of Caltanissetta, which is celebrated in the bunker hall of the Malaspina prison in Caltanissetta, the defendants are, in addition to the former anti-mafia champion Antonello Montante, former president of Confindustria Sicily, the former president of the Region Rosario Crocetta, the former councilors Linda Vancheri and Mariella Lo Bello, the former Irsap commissioner Maria Grazia Brandara, the entrepreneurs Giuseppe Catanzaro, Rosario Amarù and Carmelo Turco, Vincenzo Savastano deputy commissioner at the time of the events of the Police at the Fiumicino border office , Gaetano Scillia Dia center manager of Caltanissetta from 2010 to 2014, Arturo De Felice, Dia director from 2012 to 2014, Giuseppe D’Agata, colonel of the carabinieri, and Diego Di Simone Perricone, former head of Confindustria security. Now we await the hearing of January 30 to understand what will happen to the ‘Maxiprocess’ of Caltanissetta.