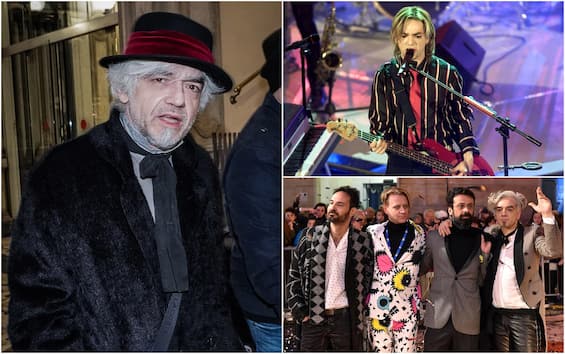 He is one of the most original, innovative, eclectic, but also controversial and controversial Italian artists. It is Marco Castoldi, aka Morgan. Today, December 23, 2022, he turns 50. Born in Milan in 1972, he approaches music very early: at the age of 6 he starts playing the guitar, at 8 the piano, at 9 composing, at 17 he dedicates himself to the electric bass. In 1988 he founded the Golden Age with Andrea Fumagalli. A musical and artistic collaboration begins between Morgan and Andy which, with some breaks, still goes on. In 1992 they set up Bluvertigo, a group that became the protagonist of the Italian music scene in the 1990s. In 2003 it comes out Apartment songs, Morgan’s debut solo album. Marco Castoldi is also dedicated to other projects: books, cinema and theatre, soundtracks, TV participations (he has won five of the seven editions of X Factor Italia of which he has been a judge). To celebrate his birthday, here are some of his best and most famous songs from him.

Iodine is the single that marks the official debut of Bluvertigo, taken from the 1995 album Acids and bases. With this song the band participates in Sanremo Giovani, obtaining positive reviews but failing to qualify for the next edition of the Festival. “Hate, and this is a song about hate” Morgan sings. It’s still: “Is it always necessary to talk about love? Do we always have to make the sun come up anyway? Is it necessary to pretend to do good? Is it necessary to donate roses at parties? Well, I honestly also feel: I hate”.

Other forms of life

Bluvertigo’s second album is Metal not metalreleased in 1997. Rolling Stone Italy included it among the 100 most beautiful Italian records ever. One of the individual excerpts is Other forms of life, a song in which electronic and dance merge and the band’s contaminations emerge strongly. “If flowers didn’t exist/Could you imagine them?/If fish didn’t exist/Could you imagine them?/In other parts of this universe it’s easy to realize/Everything exists that I still can’t imagine/It’s practically obvious/That they exist other life forms”, reads the text.

Another famous song by Bluvertigo is Absinthe (The Power of Nothing)taken from the album Pop Tools. With this song the group participates in the Sanremo Festival 2001 and is positioned in last place. In an interview the band reveals that they wrote it under the effect of the distillate. The video clip is directed by Asia Argento, the singer’s partner at the time. In addition to the actress, Franco Battiato (also mentioned in the text) and Roberta Castoldi, Morgan’s sister, also appear. “The world is so devoid of love / I unlearn to hate / Deep down if you lose control / You do nothing wrong”, is the beginning of the piece.

In 2003 it comes out Apartment songs, Morgan’s first solo album (Bluvertigo never officially break up, but they do take a break). The disc wins the Targa Tenco as best debut work. The first single is Somewhere else, which becomes one of the singer’s most iconic songs. “I’ve decided / to get lost in the world / even if I sink / I let things / take me elsewhere / it doesn’t matter where”, he sings. In 2018 Rolling Stone Italy crowns the song – “a melancholic chanson about change and finding oneself” – as the most beautiful Italian song of the millennium.

It is also part of the same album The baby, Morgan’s second solo single and another hit by the artist. The song is dedicated to Anna Lou, her daughter in 2001 by Asia Argento. “I’m the baby/And I do what you are not allowed/Every day that passes I get longer/For every leaf that falls on the grass I grow a hair/Every ant that passes is my friend”, reads the text.

Morgan’s second solo album is Not to money, not to love, or to heaven (written just like that). Released in 2005, it consists of covers of the songs contained in Fabrizio De André’s 1971 album of the same name. With this work, Morgan was awarded the Targa Tenco as best interpreter. It was Dori Ghezzi, De André’s partner, who proposed to the artist to revive that album by reinterpreting it. “I gave him carte blanche and the result thrilled me,” she said. Among the songs there is A judge: Morgan revisited the arrangement, performing the song’s theme each time with a different instrument, until the finale where it all adds up.

In 2007 Morgan’s third solo album was released, From A to A. One of the most beautiful songs is Absurd love, dedicated to Asia Argento. The song begins like this: “Absurd what happened/When I saw you for the first time/I wore a heart when I entered the room/But when I left I didn’t have it anymore”. In an interview with The RepublicMorgan recounted what happened when the actress first heard the song: “She cried. And indeed that was my intention. We need to go back to music that triggers strong emotions. Enough with the flatness of the politically correct. We have to be extreme, like I am in this album, in lyrics and sounds, which sometimes come from classical. Absurd love reworks Bach, Liebestod starts from Wagner’s Tristan and Isolde”.

Among the most famous songs of Morgan one cannot fail to mention Sincere. With this song, the artist participates, paired with Bugo, in the Sanremo Festival 2020. During the fourth evening, however, Morgan begins the performance by changing the text and inserting criticisms of Bugo. Bugo reacts by leaving the stage. The two are disqualified, while the video becomes one of the most viewed of that edition of the event and hundreds of memes are born. The original lyrics of the song read: “Good intentions, education/Your profile photo, good morning and good evening/And gratitude, circumstances/Drink if you want but do it responsibly/Put everything back in order/Brush your teeth and don’t feel jealous/Don’t complain that there ‘It’s getting worse/Remember you need to get gas/But it’s just me”. The text modified by Morgan after the disagreements with Bugo, however, is: “Your bad intentions, your rudeness/Your bad impression last night/Your ingratitude, your arrogance/Do what you want by putting your feet up/Of course disorder is an art form/But you only know how to cultivate envy/ Thank goodness you’re on this stage/Respect whoever brought you on this stage/And this is me”.

Battiato (it breaks my heart)

What is currently Morgan’s latest single was officially released on August 1, 2022, about ten years after Spirit and virtue. It’s called Battiato (it breaks my heart) and it is a tribute to the singer-songwriter from Catania, who passed away on May 18, 2021. Morgan said he wrote the song before Battiato died, when he learned of his illness. “When I realized that his so intelligent mind was about to be deteriorated like a beautiful mandala that is erased forever I was seized with deep sadness,” said the artist. The song tells the story of their friendship. “It’s always been brilliant / most original of all / that’s exactly why it resonates through time” Morgan sings in one passage.