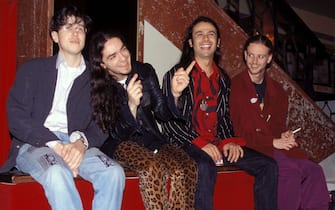 Morgan is also the leader of Bluvertigo, founded in 1991 together with Andrea Fumagalli, Marco Pancaldi (later replaced on guitar by Livio Magnini) and Stefano Panceri. Following the abandonment of Panceri, they meet Sergio Carnevale in Monza during a music competition at the “Incantesimo” and will insert him as a new drummer. In the photo she is sporting a look with super long wavy hair

Over the years Morgan has alternated his solo career with that of Bluvertigo’s frontman. Pictured in a leopard look

Dancing with the Stars 2021, here is the cast of contestants. PHOTO

With Bluvertigo he released 3 studio albums: “Acidi e Base”, “Metallo non metallo” and “Zero”. The electric blue touch of the boa is super chic

Morgan with Bluvertigo in 1999, almost unrecognizable, the style is always of great class

Morgan with Bluvertigo in Sanremo 2001 with blond hair

Morgan, The bad intentions: the full version of the song with Bugo

A very young Morgan at an event in 2009, with a goatee and sideburns.

Sober outfit and hairstyle for Morgan in the photo with Bluvertigo during Sanremo 2016.

Morgan was for years a judge of X Factor, a talent in which he always showed off eccentric and original looks.

X Factor, all the judges of past editions. PHOTO

Stalking and defamation, indictment for Morgan

Morgan in total white at an event in 2021 in tribute to Franco Battiato.

Morgan participated in the latest edition of Dancing with the stars showing off elegant outfits like this one in the photo.