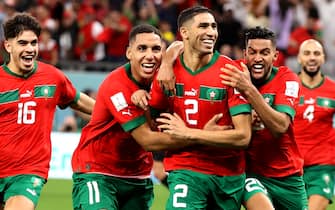 Great celebrations around the world for the transition in the quarterfinals of the World Cup in Morocco. Lots of Moroccan fans took to the streets to celebrate the winning penalty by Ahraf Hakimi: it was his final signature on penalties against Spain, which gave a piece of history to the North African selection, never got so far in the World Cup

WATCH THE VIDEO: Also in Milan it’s a great celebration for Morocco

MILAN (Italy) – Lots of i Moroccan fans that have celebrated on the street, especially in Corso Buenos Aires, where they are fireworks were also fired

Another picture from the party a Milan. But Moroccan fans have poured into the streets in many Italian cities, from Turin to Florence

RABAT (Morocco) – Thousands of Moroccans also flocked to the streets of Rabat: in the Moroccan city the celebrations for the passage of Bounou and companions they will probably continue all night long

Turin, celebration of Morocco fans after the World Cup victory

AMSTERDAM (Netherlands) – Thousands of Moroccan supporters also in the Mercatorplein, square in Amsterdam

World Cup 2022, because Morocco-Spain is not just a football match

THE HAGUE (Netherlands) – There were many supporters of the Lions of the Atlasnickname with which Morocco identifies itself, also on the Vaillantlaan avenue, in The Hague

World Cup, Morocco and Portugal pass to the quarterfinals. LIVE

MADRID (Spain) – Moroccan fans also celebrated in Spain, precisely the country defeated today at the World Cup: in Madrid they met in the city center, where they celebrated with fireworks and flags

BARCELONA (Spain) – Big celebrations too in the other Spanish city par excellence: to Barcelona Moroccan fans they poured into the street

EL EJIDO (Spain) – And there were big celebrations a El Ejido, in province of Almeria, Andalusia

PARIS (France) – For the occasion, the French Moroccan fans celebrated on the Champs-Elysées, iconic place in the capital

GAZA CITY (Palestine) – The passage of the round of the African selection was also celebrated in the Gaza stripin Palestine, and more precisely a Gaza City

TRIPOLI (Libya) – Moroccan supporters poured into the street also in Tripoli, in Libya, where they celebrated the passing of the turn of the Lions of the Atlas

DOHA (Qatar) – And of course, big celebrations from the Moroccan fans in the too Doha fan zonethe capital of Qatar, where they have been set up big screens

Qatar World Cup, Morocco goalkeeper sings the anthem then asks for the change