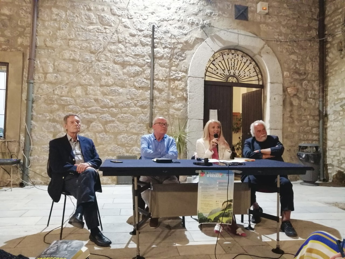 “In the thirtieth anniversary of the massacres, what is Palermo doing? Morally re-legitimizes someone convicted of mafia acts. Ended up in prison. Sometimes I have the feeling that Palermo, with some exceptions, do not give a damn about the fight against the mafia. Palermo has given legitimacy. moral to people who have recently gotten out of prison. What will the next step be? Give them a prize? And what will the next step be? Saying that Falcone and Borsellino were killed by four undermining? It’s not an election problem, my theme it’s higher. It’s called the fight against the mafia. There’s a part of Palermo that doesn’t keep anything in its soul. ” It is the cry of pain of Alfredo Morvillo, magistrate and brother of Francesca Morvillo, wife of Judge Giovanni Falcone for 40 years. The former Prosecutor of Trapani, retired for two years, spoke last night in Gratteri, in the heart of the Madonie, at the presentation of the book ‘Francesca’ by Felice Cavallaro (Solferino publisher), with the mayor of Gratteri Giuseppe Muffoletto. Morvillo does not mention their names, but the reference is to the ex Sicilian Governor Totò Cuffaro and to the ex senator of Forza Italia Marcello Dell’Utri, both convicted of mafia, who have served their sentences, and who in the last municipal elections, have been at the center of controversy for their interventions on the names of the candidates. “On 23 May of each year we see a competition to see who has the biggest say against the mafia – says Morvillo – but then, when you have to prove it with facts, nothing happens”.


“What do the people of Palermo do every year on May 23 and July 19? – Morvillo continues – they go down the street, scream, sing, shout. But when it comes to making a choice that is indicative, that is a message, especially those who have responsibility to govern us, our famous ruling class, then take a step back “. “This occasion would have been wonderful to say: ‘We do not want these characters, even if they bring votes – Morvillo continues – In the thirty years we say that we do not want people who have sold themselves to the mafia, instead the opposite has happened. , founds new parties and even a school of politics, and is courted. It is not a problem of elections, I repeat, I am not talking about a guy or a guy, but a fight against the mafia. Either we believe it or we don’t believe it “.

“There is an article of the Constitution that is not very fashionable, and which says that those citizens who are entrusted with public functions have a duty to do so with discipline and honor. What does it mean to serve the State with honor? the clean criminal certificate, apart from that some do not even have that, or something higher? This unfortunately does not happen. And I, who have been in the judiciary since the late seventies, have experienced all these facts from within the judiciary ” .

“When there are conferences where we talk about the mafia and everyone is good at saying that the evil of our land is the mafia, and on this we agree, when we then move on to the next step, consequently we should stay away from this evil. But no. There are the first problems there, when you leave the conference room and you have to make choices – explains Prosecutor Morvillo – The words are many, on May 23 we witness a competition to see who says the biggest against the mafia, everyone participates. Ministers and generals come to Palermo, all against the mafia, but the result is that there is a Palermo, the same Palermo that has contributed in blood, that opens its doors to subjects convicted of mafia, and it is admitted by some of them. The moment is bad. When we remember the people who sacrificed their lives. We are looking for compromise, the guy who, even if he smells like the Mafia, is doing me the favor “.

“And if they have to pursue a workshop goal, they do so by trampling the memory of the people who sacrificed their lives for those ideals,” says Morvillo. Which he concludes embittered: “The sacrifice of these people was of little use, something has changed but the soul of the Palermitans is far from keeping away everything that has the flavor of the Mafia …”. (by Elvira Terranova)