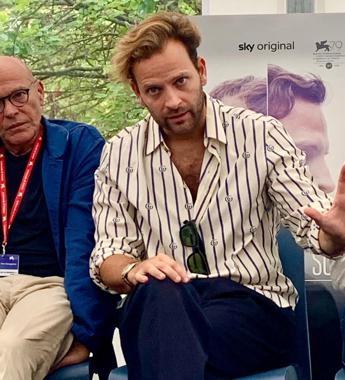 The actor in Venice to present ‘The Hanging Sun – Sole di Mezzanotte’, the Sky Original film directed by Francesco Carrozzini and produced by Cattleya, Groenlandia and Sky, which closes tonight the 79th Venice Film Festival in the Out of Competition section

To bring people back to Italian cinemas “it takes courage and productive effort, which very often does not exist in Italy, then there is promotion, that is to say that there is that film in the room, but the problem the biggest thing, in my opinion, is that you make bad films. I continue to see a lot of them, and every time I ask myself: but with directors of the Madonna, actors of the Madonna, why did they make this film? “. Alessandro Borghi does not send her to say, in Venice to present his new film ‘The Hanging Sun – Sole di Mezzanotte’, the Sky Original film directed by Francesco Carrozzini and produced by Cattleya, Groenlandia and Sky, which closes the 79th Exhibition tonight of Venice in the Out of Competition section.


“I think it’s because, albeit in a different way, each one is influenced in some way by asking himself what the public likes, and tries to make films that everyone likes. And it’s the best way to make nobody like them”, says Borghi analyzing the crisis of Italian cinemas. The actor says: “Four days ago I was in London. As always, I go to IMax and see whatever movie I can see. There the ticket costs 28 pounds, and the room was full. It is true it was’ Top Gun Maverick ‘”, but” seeing that full room has a strange effect on me. This year there have been some films that have not done the numbers they did before Covid, then Spiderman comes out and makes 47 trillion, so it means that mechanically people he still goes out to go to the cinema. So I wondered what is ‘in the middle’ “.

“The responsibility – continues the actor – is to be able to convince these people that there is not only mainstream cinema to bring the children to, but there is also a lot of other stuff that is worth going to see. “. A problem deeply felt by the talented Italian actor, protagonist of the noir thriller presented in Venice with an international production and which also sees among the protagonists Jessica Brown Findlay, Sam Spruell, Frederick Schmidt and Raphael Vicas and is taken from the best seller by Jo Nesbo ‘Sole of Midnight ‘.

“I do not want to do this work without the room – Borghi underlines to journalists – I try to make films by associating it as much as possible with the idea I had as a kid, when there was sharing of the room”. In other words, we must “try to understand that if you make a film with Borghi not always it means that it is beautiful – the actor clearly says – This thing must be part of the mentality that you must begin to regain it on the pitch”. Each of us “has to start acting, directing and writing again as if it were the last film he makes because otherwise they won’t call him anymore”.

“I am in love with this work, I have been very lucky over the years, I have taken part in beautiful projects with which I grew up and enriched myself”, adds Borghi, who explains what guided him in interpreting ‘The Hanging Sun’ : “All the time I have been trying to remind myself that when someone gives you the chance to do this job you have to be able to give something back. The fact of being paid, and even a lot, to do this job has to be something that doesn’t you should never take it for granted. Because now I am here to answer your questions, but next year it may be that I will open a watermelon stand in Porta Portese “.