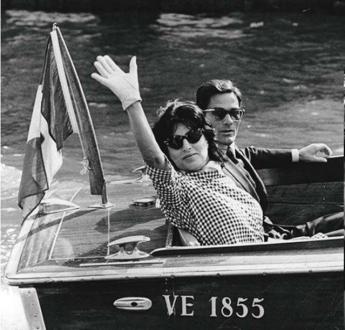 A series of events are scheduled for the platform community that will ‘tell’ the most fascinating and lesser-known aspects of the Festival’s car, the experiences experienced firsthand by the protagonists, the secrets of the cinema professions and its wonders. A world of new emotions to be experienced for the first time directly from the heart of the Festival.

Rai Cinema in partnership with TikTok brings the large community of fans behind the scenes of the Venice Film Festival. A series of exclusive appointments will reveal to the platform community the most fascinating and lesser known aspects of the Festival machine, the experiences experienced firsthand by the protagonists, the secrets of the cinema professions and its wonders. A world of new emotions to be experienced for the first time directly from the heart of the Festival.


The partnership between Rai Cinema and TikTok, which aims to create an even stronger bond between cinema and the community, was born with the idea of ​​deepening the story and thrilling the many users who use video language as the main form of communication about cinema. and entertainment. And with the drive to intercept the proposal of novelty and creativity that social networks and platforms can offer to the film industry, exploiting the potential of digital in the promotion of cinema and films.

Rai Cinema, offering the community its twenty-year experience linked to the world of audiovisual production and the dissemination of Italian film culture, will accompany some famous creators of TikTok to the heart of the activities and events of the films it will present at the Festival. The creators involved will become real ‘special envoys’ who will dialogue with actors, directors and workers. A dedicated program that will allow anyone to have a live experience from the window of one of the most prestigious film festivals in the world.

During the ten days of the Festival, the official profile of Rai Cinema (@raicinema) will be enriched with videos dedicated to #CinemaTok and #DietroLeQuinte, where some of the highlights will be told, from red carpets to exclusive interviews with film directors and actors that Rai Cinema accompanies to the Festival. Not only that, Rai Cinema will host live appointments on its profile during which some creators will accompany the community to discover the world of cinema and those who live it every day. To begin, Niko and Teo (@nikoeteo) – Venetian creators known by the community for their videos dedicated to the territory – will talk about the Lido as a place of worship for cinema and will talk with the actors, directors and producers of the films co-produced by Rai Cinema, presented in the first days of the exhibition.

The other appointments will instead focus more on aspects related to the professions of cinema, which will be discussed with the protagonists through specific focuses, along with many other stories and rumors. The creators, hosts of the Live, will be Michele Erranti (@mike_wander) – creator who has been able to transform his passion for cinema, TV series and video games into an open dialogue with the community. @gorilla_gang – a community specialized in cinema and multimedia that shares reviews and curiosities of cinema and TV series on TikTok, Gaia Sidoni (@gaiasidoni) – cinema lover passionate about the horror genre tells his favorite films and reviews films in an ironic way in his typical format Recetrash, Velia Bonaffini (@veliakforu) – her videos are dedicated to advice on movies to see or ironic quizzes.

“Alongside the activity linked to film production and distribution, Rai Cinema continues to invest and pay great attention to new technologies and communities of digital worlds – says Paolo Del Brocco, CEO of Rai Cinema. Thanks to the strong engagement capacity of TikTok , this agreement becomes a precious opportunity to connect a new generation of users with the world of cinema and thus contribute to a greater diffusion of film culture. With the idea of ​​thrilling and attracting new potential audiences and bringing them closer to beauty. of the great cinema “.

“The TikTok community has always stood out for its originality and creativity, for the ability to know how to entertain and be entertained with unique, informative and constantly evolving content – explains Salvatore Di Mari, head of partnerships and community of TikTok Italia – Il mondo del cinema and its story find great space on the platform, as demonstrated by the important milestone reached by the hashtag #CinemaTok: almost 1 billion views. We are proud of the meeting between Rai Cinema and our creators – he adds – and we are sure that the the entire community will appreciate the high-level content they will offer. ”