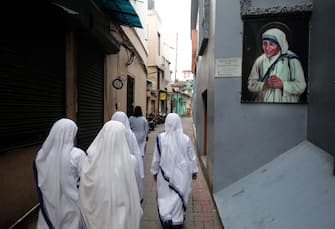 It is celebrated today, in Calcutta, the 25th anniversary of the death of Mother Teresa. And for the occasion, a new home for street children is born in the very central Park Street, on the initiative of the Missionaries of Charity. Sister Mary Joshep, superior general of the congregation a few months ago, after Nirmala Yoshi and Mary Prema, announced that numerous masses and prayers will be held in the capital of Bengal, as in many other cities throughout India

For the order “the priority is to keep the saint’s legacy alive continuing to offer free all the good we can. “The Missionaries have 19 houses in Calcutta alone, where they continue, as when the foundress was alive, to assist the poor, children, dispossessed, supported by an uninterrupted flow of anonymous donations. Another 244 houses are scattered throughout the rest of the country

The 20th anniversary of his death

Over the years, the work of the Macedonian nun, proclaimed a saint by Pope Francis in 2016, it has spread all over the world: the order, with 5,000 sisters, is present in 139 countries. And an important recognition came in 2012 from the United Nations, which declared the date of September 5 as World Charity Day

In 2016 the congregation got it from the Indian government the official registration of the sari: the cotton cloth, woven on hand looms with the blue stripes representing the virtues of order, is now protected by law

Mother Teresa of Calcutta – Anjezë Gonxhe Bojaxhiu – is died on September 5, 1997. She was born to an Albanian family in Skopje, present-day Macedonia, in 1910. At 18 she had decided to take vows. And already at 19 she had moved to India for the first time. She is known for having founded the Congregation of the Missionaries of Charity in 1950. To the three vows common to all orders (poverty, obedience and chastity), she adds a fourth: to be at the service of “the poorest of the poor”

Mother Teresa stays one of the most popular icons in the country in which he chose to live: his portrait is found everywhere, together with that of Gandhi and Ambedkar, the champion of the oppressed castes. Despite this, the life of his congregation in India is not always easy, with Hindus in various states becoming more and more intolerant

In the photo, the detail of a statue of Mother Teresa in Calcutta