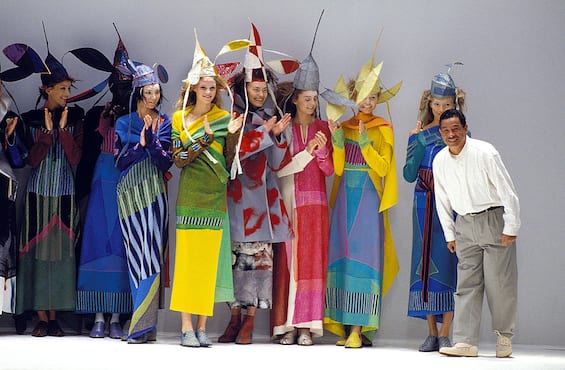 Issey Miyake passed away in hospital in Tokyo at the age of 84 on Friday 5 August, to give the news today, 9 August, to his office. Miyake “died on the evening of August 5,” one of his collaborators told AFP on the phone, without providing further details on his death. The Japanese public television channel also announced the death of the designer.

In his brilliant career, the artist, known internationally for his creations that combine Japanese tradition with cutting-edge materials and cuts, has been an authentic pioneer who has always known how to look beyond the boundaries drawn by his time, has always followed their instincts, and never the trends of the moment. The designer is famous not only for his tailoring creations, but also for having given birth, in 1992, to his first fragrance, L’eau d’Issey, a fragrance that also influenced the world of perfumes.

“the tailor of the wind”

Miyake was born in Hiroshima on April 22, 1938 and was a survivor of the atomic bomb, graduated in 1964 from the University of Tokyo (Tama Art), had started taking his steps in the fashion world very early, to leave an indelible mark.

The Japanese creative genius trained as a stylist in Europe and the United States before opening his own fashion house in Tokyo in 1970, and starting to hit the catwalks of Paris and New York, where he gained global recognition. Often referred to as the “tailor of the wind” Miyake is known foruse of pleats in her garments, for her simple turtleneck sweaters like those popularized by Steve Jobs or for her line of Bao Bao bags with geometric motifs, among his many creations.

Issey Miyake and the atomic bomb (which killed his mother)

Issey Miyake was seven on August 6, 1945 when the United States dropped the first atomic bomb in history on his hometown, killing 140,000 people and traumatizing survivors for life. He survived, but his mother died three years later from radiation. Just graduated from Tama University of Fine Arts in Tokyo, he moved to Paris to study at the Chambre Syndicale de la Couture Parisienne school. Back in Japan, in 1970, he began a career as a fashion stylist and designer characterized by research on new materials and technologies. Among the various awards received, the prestigious Compasso d’oro award in 2014, for the creation of the IN-EI Issey Miyake lamps, made for the Italian company Artemide, technologically advanced and with reduced consumption.