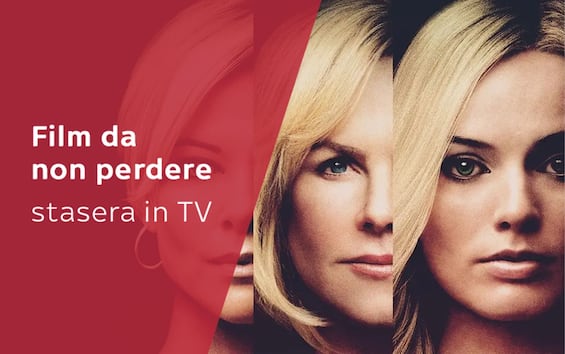 Bombshell – The voice of the scandal, 21:15 on Sky Cinema Due

Nicole Kidman, Charlize Theron and Margot Robbie in the true story of the Roger Ailey case.

The bridges of Madison County, 21:00 on Sky Cinema Romance

Clint Eastwood and Meryl Streep in a sentimental film that tells the intense love between a photographer and a married woman.

Award-winning film depicting modern Iran. Tensions are unleashed in a family over the choice of expatriating or not.

Isabelle Huppert plays a French mayor who, before the end of her mandate, wants to redevelop a banlieue.

Gabriele Salvatores directs Fabio De Luigi and an ensemble cast in a comedy. The stories of two families intertwine when their respective boys decide to get married.

Liam Neeson is a former federal agent who wants to unearth a conspiracy involving the FBI.

Science fiction film about a spectacular and dangerous interplanetary sport.

Ben Affleck in a John Woo movie. An engineer who erases memories finds himself the victim of a conspiracy.

Chris Rock in the umpteenth chapter of the Riddler saga.

The British national team faces the US “cousins” in Qatar.

TV series that tells the adventures of a specific section of the SWAT that operates in the city of Los Angeles.

A woman runs away with her daughters from an abusive husband and tries to start a new life.

Alessandro Preziosi and Claudia Pandolfi are two brothers on bad terms who, by will, will be forced to live together.

Will Smith in an apocalyptic movie. In a world ravaged by zombies, a doctor tries to save humanity.