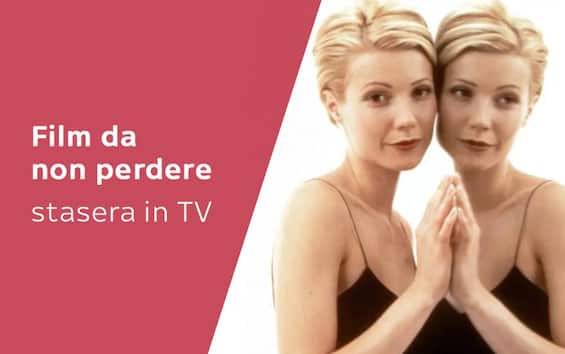 DreamWorks animated gangster movie. Some criminals will pretend to be good to escape from prison.

DreamWorks animated gangster movie. Some criminals will pretend to be good to escape from prison.

Gerard Depardieu in the history of the birth of the novel by Honorè de Balzac.

Gwyneth Paltrow in a film in which a person’s life splits according to the choice made.

Ficarra and Picone in a Christmas-themed comedy. A priest chases a thief and by magic they find themselves catapulted back to the time of Jesus.

Adam Sandler and Jennifer Aniston in a comedy in which a surgeon seduces women by inventing marital crises with his non-existent wife.

Checco Zalone is back with his new social comedy. Pursued by creditors, a boy flees to Africa, where, however, he finds war.

Salvatore Esposito and Greta Scarano in a romantic comedy. A criminal entrusted by a boss to manage a restaurant will find other ways thanks to a very feisty chef.

Cult film with Tom Cruise and Val Kilmer. The young Maverick decides to participate in a prestigious aviation school.

Harry Potter and the chamber of secrets, 21:00 on Sky Cinema Family

Second film in the Harry Potter saga at the cinema, based on the novels written by JK Rowling.

Vince Vaughn and Hailee Steinfeld in a thriller. A crook pursued by the police and other criminals flees with his daughter.

Jim Broadbent and Helen Mirren in a biopic. An English taxi driver steals a precious painting and demands an unusual ransom from the government.

Romantic comedy with Kristen Stewart and Mackenzie Davis. Two girls are in love and want to get married but have never disclosed their relationship.

The best of the Montecarlo Circus Festival, at 21:00 on Rai 3

Gregory Peck and Audrey Hepburn in a cult film. A princess visits Rome incognito with a journalist.

Christmas concert of the famous trio live from Jerusalem.

The director of a charity falls in love with a prince.

Documentary that traces the last years of the life of the leader of Queen.