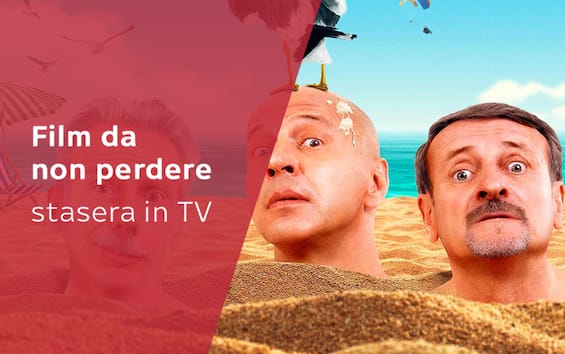 Film with Aldo, Giovanni and Giacomo. By mistake, three families are forced to spend the summer holidays together in the same house.

The Befana comes at night, 21:00 on Sky Cinema Family

An elementary school teacher (Paola Cortellesi) is actually the Befana, but she is kidnapped: her pupils will have to save her.

One year with Salinger, 9.15 pm on Sky Cinema Due

Margaret Qualley and Sigourney Weaver in a comedy-drama. An aspiring writer must answer letters sent by Salinger fans.

Jeff Bridges and Tim Robbins in a film inspired by the 1995 Oklahoma City bombing.

Margaret Qualley and Sigourney Weaver in a comedy-drama. An aspiring writer must answer letters sent by Salinger fans.

Maggie Gyllenhaal, Olivia Colman and Dakota Johnson in a film based on the book by Elena Ferrante.

Matthew McConaughey and Kate Hudson in a romantic comedy. A journalist seduces an advertising man with the intention of getting dumped.

Leonardo DiCaprio and Russell Crowe in an action movie. A CIA agent must capture a terrorist leader of Al Qaeda.

Denzel Washington and Mark Wahlberg in an action movie. Two men collaborate with drug traffickers but nobody knows about the other.

Biographical film on the life of the well-known footballer Zlatan Ibrahimovic.

Live action Disney of the legendary cartoon, with Cate Blanchett in the role of the stepmother.

Special stage of Elisa’s tour, with Dardust on the piano.

Last chapter on the history of the first Empress of Austria.

Documentary about areas of snow and ice on Earth.

Sequel to the successful first chapter. This time the group of wizards have to unmask a tech tycoon.

Arnold Schwarzenegger and Jamie Lee Curtis in a spy comedy. An apathetic husband is actually a secret agent whose wife is going to be kidnapped.

Lillo and Greg in a comedy. Two friends decide to swap their genetic code in an experiment.

Documentary on the life and political career of Roberto Formigoni, convicted of corruption.