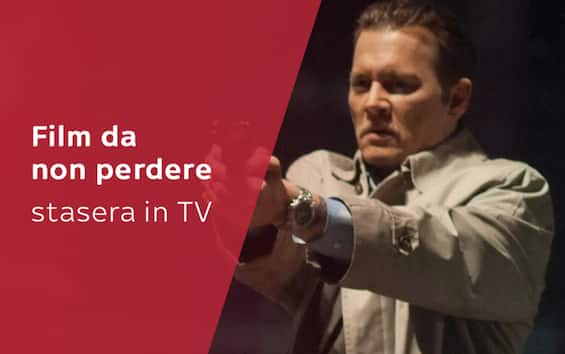 Johnny Depp and Forest Whitaker in a thriller in which a reporter and a detective investigate the murders of rappers Notorious BIG and Tupac Shakur.

Intrigue: Death of a writer, 21:00 on Sky Cinema Suspense

Thriller with Ben Kingsley. A writer organizes the murder of his wife but the woman’s body disappears.

Johnny Depp and Forest Whitaker in a thriller in which a reporter and a detective investigate the murders of rappers Notorious BIG and Tupac Shakur.

Patrick Wilson is an Arizona sheriff who teams up with his predecessor to fight guns and drugs.

A girl leaves Moscow disappointed by her fiancée but on the train she will have to share a bunk with a stranger.

Alessandro Siani, Christian De Sica and Diletta Leotta in a Christmas comedy. To put Santa out of business, a corporation infiltrates a con man at the North Pole.

Comedy with Claudia Gerini, Sabrina Impacciatore and Cristiana Capotondi. Three women involved in a murder attract the suspicions of a commissioner.

Having survived a heart attack, a man takes control of his life and decides to track down his never known daughter.

Angelina Jolie protagonist of a spy-action. A CIA agent is accused of treason and will have little time to prove her innocence.

The battle of Hacksaw Ridge, 21:00 on Sky Cinema Action

Mel Gibson directs Andrew Garfield in the true story of a soldier who refused to use weapons in war and became a rescuer.

Documentary on the most beautiful places on the European continent.

Lino Guanciale and Gabriella Pession in the third season of the series.

Federica Sciarelli leads the program that deals with finding missing people and analyzing some disappearances.

Television magazine in which politics and social issues are discussed, with Veronica Gentili at the host.

Coppa Italia match between the reigning Italian champions and the grenade team.

Sequel to the now historic comedy “Mum I missed the plane”. This time little Kevin will be left in New York.

A writer travels to Vermont for inspiration and meets a fascinating man.

Romantic comedy with Riccardo Scamarcio and Laura Chiatti on young and old loves.