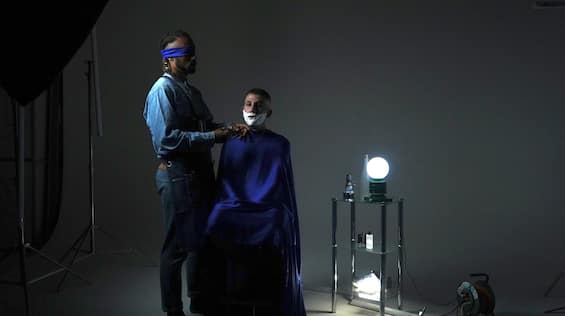 We think that fragility can be attributed as a characteristic or original condition to every form of life, whether it is microscopic, gigantic, at the top or bottom of the food chain. It doesn’t take much to bring about a radical change for its existence. And we are perhaps the most fragile creatures in the universe in this sense, given our eccentric behaviors with respect to our habitat. So we think that revealing one’s fragility can be synonymous with revealing one’s strength, being aware of what one is by acknowledging it. But let it be clear that the song was not conceived a priori with the intention of telling about fragility in such a universal way, but was born spontaneously from our creativity.

The initial ref was born by chance from a “mantra” hummed in the shower “oh but can you imagine if all the fragile were more able to be themselves?!”

After a few minutes the skeleton of the instrumental came to life to try to give a rhythmic shape and a color to those words. Then, in such a natural way that it seemed that the idea had come from both of us at the same time, we finished the concept started in that mantra, in an incredibly simple way, stripping ourselves of all barriers and telling ourselves in complete transparency. Understanding one’s own fragility, accepting it, and making it one’s own by making it an instrument of expression and liberation, I think is one of the greatest and most complex goals that a person can try to achieve. But even more complex is choosing to live up to it. Our ego often feels very fragile, and as it is written in the passage, even very small. More than it was years ago. Perhaps because the world we live in today often makes us feel a little too simple, but in a moment too complicated.

Thinking about this song, fragility could mean feeling out of place, like feeling at ease in discomfort. It depends on who you are when you approach this issue. We believe that fragility should not be removed but faced, looking for a solution. Like a person who wants to communicate with others but finds it very difficult because of his shyness. One solution could be to start writing what you would like to say, and then get to talking. Finding the most suitable way for us to go further. In the end, it’s what we do with music and how many of the great artists have done that excites us. The video clip came to life thanks to the intuition of our friend Yari Saccotelli who, several months after the song was made, embraced our “musical fragility” by visually depicting it. Wanting to summarize the concept in a few words, the video simply wants to highlight the fragility and the blurred line between relationships of power and trust between people.

One man holding a sharp razor behind another. If you think about it, he has two plausible choices: take care of it (shaving it) or do the exact opposite (cutting its throat as could happen in one of Tarantino’s best films).

Metaphorically each of us could be the barber or the bearded man, like the executioner or the victim of ourselves and/or of those close to us. It’s up to us to choose how to use our tools, strengths or weaknesses, determining who and how we will be once we choose what to do and how to do it.