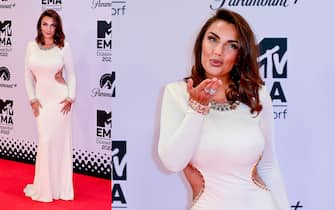 Elettra Lamborghini was the only Italian ambassador to tread the red carpet of the PSD Bank Dome where the prestigious MTV EMA 2022 took place. The curvy singer showed off a long mermaid dress with side portholes and rhinestone decorations, created for she by Elisabetta Franchi

Rita Ora, presenter of the evening together with her new husband, director Taika Waititi, has changed many looks. One of the most dramatic is the one she wore upon her arrival, a lace Elie Saab dress, with 3D floral appliques, halter neck and tail that gave her the opportunity to immediately show off her super sexy verve

Bebe Rexha amazed everyone with a velvet sculpture look that is a true work of art to wear. The creation of Fjolla Nila bears the signature of the designer Bad Binch Tongtong

Taylor Swift had prepared the typical triumphant look and for this memorable night that saw her take home numerous awards. The star gave her preference to David Koma, signature of net dress jewel (literally, a fishnet dress) with maxi emerald green stones. The creation with a heart-shaped bodice is a customization of a model from the Fall 2022 collection

During the evening, the pop star changed clothes and arrived on stage with a minidress with a polo collar completely studded with rhinestones, also by Londoner David Koma, for a guaranteed mirrorball effect

More rhinestones for Hugo Gloss, in a black suit dotted with glittering stones, starry sky style. The Brazilian presenter and youtuber showed off an Atelier Michelly look with Prada glasses and a W & W brimmed hat

The most beautiful looks of the fashion Oscars red carpet

Loyal Gods bird dressLeonie Hanne doesn’t give up on feathers this time either and opts for the most colorful look of the latest Maison Valentino collections, a real explosion of fireworks

Beyoncé, Angela Bassett and the others: the incredible looks for the Wearable Art Gala

Among the performers of the evening, Muse also proved to have a strong sense of style by choosing different and uncoordinated looks. The best, undoubtedly, the colored spray effect by Alexander McQueen chosen by Christopher Wolstenholme, the band’s drummer

German influencer Riccardo Simonetti stood out for his dollar print look created by Marina Hoermanseder, perhaps a way to exorcise the bogeyman of the global economic crisis. The hat with rhinestone fringes is already seen for this type of event (does the name Billy Porter mean anything to you?)

Luis Gerardo Mendez with his patterned suit and the lace-up top under the jacket shows that the men’s outfit for these occasions can be anything but boring. The Mexican actor wore Roberto Cavalli

Stealing attention by bringing the most talked about character of the year to the red carpet: Kanye West. Noa Kirel asked her stylist (Italy Bezaleli) for an explosive creation and the artist satisfied her starting from an old inspiration: a dress printed with Michael Jackson faces seen in the 90s. Hence the decision to print a fabric with Ye’s faces to which a complicated interweaving of chains and charms with the Star of David was added

The musician Jack Fowler also convinces with his suit with jacket with pockets by the English brand AGR. His style is definitely in line with the event

Fans across Europe and the world have come to love them for their looks, even before memorizing their tunes. The Kalush Orchestra lands in Germany to collect its award by proposing the heterogeneous and now very recognizable look of its components to the international public

The singer Domiziana gives the public a fashion moment in full gothic-chic style, a trend she has always loved, which has recently come back into vogue. Her spectacular lei dress is a German creation like her, by Nur Hektor