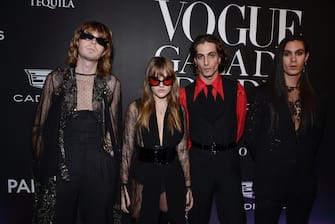 Måneskin will present themselves at the starting line with two nominations: Best Italian Act and Best Rock

MTV EMA 2022, the nominees: from Harry Styles to Måneskin. PHOTO

In 2021 Damiano, Ethan, Victoria and Thomas triumphed in the Best Rock category

Måneskin, Damiano stops the concert in Mexico: “Make room, someone is sick”

The group has just released the new single The Loneliest, the first one from the album Rush! due out January 20, 2023

Maneskin, the new album Rush! due out in January

The young singer has returned from months of great success

Blanco at the Milan Hippodrome with two sold-out dates: what you need to know and the lineup

Among his most famous songs we find Notti in bianco, You make me crazy with Sfera Ebbasta and Chills with Mahmood

Blanco calls his father on stage: “I had to be forgiven many things”

We then move on to Elodie

Venice 79, Elodie on the red carpet with the cast of “Ti mangio il cuore”. PHOTO

Among his songs All my fault, Margarita with Marracash, Vertigine and Bagno at midnight

The group announced a tour of Italian stadiums in 2023

Among the successes of the training Ringo Starr, Pastello Bianco and Giovanni Wannabe

We end with Aries

The very young singer, born in 2002, is among the rising stars of music

MTV EMA 2022, the appointment is Sunday 13 from 8 pm: guests, nominations and where to see them