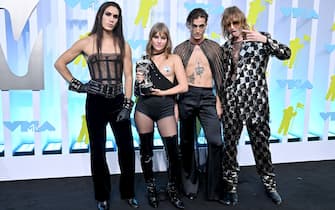 Total look Gucci for the Maneskin, who chose the Italian maison to receive the award as “best alternative video”. Nude look for Damiano and Victoria, he with a pair of chaps and thong on view, she with a one-shoulder outfit that leaves one breast uncovered

Bold look for Ashley Graham, who opted for a cut out dress by Houghton. Total black for the model, who exhibited her curves with skilful intertwining games

Taylor Swift chose to shine on the stage of the Prudential Center in Newark, New Jersey. The singer wore an Oscar de la Renta short dress with tactical transparencies paired with a pair of jeweled shoes. You have won the most prestigious award for the short All too well

Lili Reinhart opted for a long Fendi dress from the spring-summer 2022 collection. A model by Kim Jones that is characterized by transparent lace inserts that do not reveal too much

Lil Nasx decided to impress: naked torso and large black structured skirt paired with a giant headdress and leather pants of the same color. For him, Harris Reed total look

Måneskin, the performance with Supermodel at the MTV Video Music Awards 2022. VIDEO

Double dress for the singer Lizzo, who as her first outfit chose a scenographic very wide dress from the Jean Paul Gautier Couture line with uncovered shoulders and matching gloves

MTV Video Music Awards 2022, everything you need to know

Second most aggressive dress for the singer Lizzo, who showed up on stage with a total pink latex suit, amphibians included, and transparent inserts on the arms and legs, designed especially for her by Rey Ortiz

Record-breaking Måneskin, the history of the Italian rock group in 30 photos

Jewel bodice studded with rhinestones with wide neckline and long asymmetrical skirt by Nicki Minaj. A pink total look by Dolce and Gabbana that the singer paired with Cicada jewels

Becky G amazed everyone with a long colorful A-line dress, studded with all-over sequins with a tarot design and transparent inserts on the sides, a Zuhair Murad Couture creation

Latin look for Sofia Carson, who wore a total black creation by Carolina Herrera. A long dress to the feet with bare shoulders, combined with a cape of the same color, headdress effect

Asymmetrical fiery red dress for Anitta, who collected the statuette for the best Latin video. Bodice with embroidery on one breast for the Brazilian singer and long curvy A-line skirt

Matching looks but by different designers for Blackpink, who wore black dresses with models interpreted respectively by: Celine, Dior, Chanel and Sain Laurent. Only this last outfit discovered the legs, for the other long skirts, short tops and transparencies