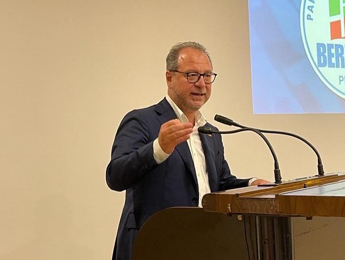 Interview with candidate undersecretary in Palermo, ‘Sicilians will not fall into vulgar populism’

He says that Sicilians “are intelligent people” and that, therefore, “they will not fall into the trap of vulgar populism”. And that neither the candidate Cateno De Luca “nor others” can “undermine the candidacy of Renato Schifani” as President of the Sicilian Region. But he is keen, above all, to underline that he is not “a parachute” from above for the candidacy in Sicily, to the Chamber in the plurinominal college of Palermo. Then he spares no criticism of the M5S candidate Roberto Scarpinato, whom he defines as a “Khomeinist”. Giorgio Mulè, 54, Undersecretary of Defense, in an interview with Adnkronos talks about his “long” election campaign in Sicily and the program for “the future government” but also talks about the Regionals that will be held in Sicily on the same day as the Politics , next Sunday, September 25th. “I want to clarify that my candidacy in Palermo was directly desired by President Berlusconi and obviously shared with Gianfranco Miccichè, therefore, with the coordination of Forza Italia Sicilia – says Mulè, fresh from a visit to the Palermo shipyards – It is natural return of a Sicilian who has served his land from a professional point of view and wants to continue to serve it also from a parliamentary point of view, hopefully with a center-right government. He does not mean a return to the origins but the proof that personal and professional rootedness is something that cannot disappear from the experiences made. So he means taking back by the hand a region like Sicily and a city like Palermo that is inside me, that I want to serve ”. “Anyone who says I’m a parachute says solemn nonsense, I was born raised, trained, I worked and I am linked to this land also from a professional and political point of view”.


“I hope that Italians and Sicilians will give a clear majority by going to vote and doing what is a right but also a duty enshrined in the Constitution to give a majority as clear as possible – adds Mulè – in this the Sicilians have a chance of power elect a governor, Renato Schifani, and a center-right majority that will have doors wide open thanks to the fact that it can count on the government of Rome. For Sicilians it is a unique chance that must be seized, in the projection of an island that, thanks to the national government, will finally be able to find the listening it deserves. It is a unique opportunity ”. Does the undersecretary expect strong abstention, especially in Sicily? “You must also facilitate the exercise of democracy from the central point of view of the state. The fact of wanting to condense the elections into a single day, mortifies the ability to attract people to the polls. Especially with the peculiarity of Sicily which is in the middle of summer, it damages having concentrated the election day. I fear abstention and I fear that many people, not those we expect will go to vote, which will not only be a damage for the center-right, for an electoral that would demand participation ”.

In Sicily, with the data currently available, it will be difficult for an elected President to have a majority in the classroom. “It is one of those cases that I consider a period of unreality, but I hope the opposite. Traveling around Sicily, not only for Palermo, but touching the enthusiasm and adhesion to the program by the hand of those who want to govern the region, I feel I can say that this danger can be overcome thanks to the convinced adhesion of the Sicilians to the lists that they are very strong, I’m talking not only about Fi and the idea we have in this region. If there is a lack of majority, the wisdom of President Schifani will have any numerical deficiencies. But this scenario will not happen ”, says Mulè.

Could the presidential candidate Cateno De Luca represent an obstacle to Schifani’s race? “Once again we want to make appear what it is not – says Giorgio Mulè – I do not think at all that neither De Luca nor the other candidates can undermine Renato Schifani but I say it with good reason, compared to what I have seen in this election campaign . Sicilians are such intelligent people as to understand and above all to make the difference between those who, beyond articulating the subject, predicate and swear word, make and those who instead articulate a development thought for Sicily. I trust in the intelligence of the Sicilians who will not fall into the trap of vulgar populism, administrative nihilism, programmatic aridity ”.

Then, speaking of the criticisms of the M5S leader Giuseppe Conte of Renato Schifani but also of the candidate Roberto Scarpinato, former Attorney General of Palermo, on the trial situation of Schifani, accused in the Montante trial, Giorgio Mulè says: “Sicily is a land where too much guarantees have often been burned worse than they did with witches during the inquisition. I will limit myself to saying that compared to the past on Renato Schifani there are two archiving sentences, both solicited by a prosecutor called Di Matteo and who today, I say shamefully, re-reads those filings as if they were not such. Schifani’s criminal certificate has five letters where it says ‘nothing’, so he is an upright and clean person, from a judicial and political point of view ”.

And he adds: “It is strange that even today in 2022 an electoral campaign is staged on an event that is totally residual compared to the so-called Montante case. I am not surprised that a former prosecutor, not a former judge, like Scarpinato, who has always had a ‘Khomeinist’ vision of justice and therefore does not surprise me. The Sicilians should be amazed that evidently must not have been the impartiality required of a magistrate by expressing Scarpinato those concepts that demonstrate that he was not so independent having joined, immediately after retirement, a party that makes justicialism its North Star. If we talk about symbols, Scarpinato is certainly not a symbol of independence or of impartiality of the judiciary. His words show how biased he is today by raising doubts, with respect to his ability to be third and free in the judgment he had expressed in his professional activities “.

On Silvio Berlusconi’s absence in Sicily, Mulè said: “President Berlusconi has focused his election campaign trying to be present in the places where the electoral campaign takes place, so on social media, on Instagram, on Facebook on all channels. that reach the most diverse population groups. To this he has joined commitments of radio and television. Physical attendance was scarce and only on 23 September Berlusconi will close the electoral campaign in Milan. Not having gone around is equivalent to a fact: that you don’t want to create expectations from one region over another. Here in Sicily we also vote in the regional, but he, strong and aware of the strength of Schifani’s candidacy, applied what he applied elsewhere, so as not to create discontent ”.

Speaking of the programs, he said that “at national regional level they coincide” because they have to do “with the news”. For Mulè “the first emergency is the carobollette, we need disruptive tools that can give companies serenity. And the extra trade deficit is the last foothold to be hooked on, once all attempts to find the necessary money have been exhausted. As during the period of Covid we should invent tools, the creation of a fund that guarantees the bills towards entrepreneurs. The state acts as guarantor for businesses and businesses contract not a mortgage but a two or three year repayment pact, even starting from 2023. The same must be done with families ”.

Then he explains that “we should immediately think about the stability law that must be thought of by mid-October, there we will have to trace the guidelines of our government, on the fiscal front, with respect to which we will not implement the flat tax at all. We will start with a reshaped taxation downwards and not imagining putting our hands in the pockets of the Italians ”. Then speaking of citizenship income, Mulè explains: “In Sicily there are just under 700,000 earners, and here we talked more about crime and judicial news than for his ability to accompany those who received it in their work. The data are merciless especially in Sicily, where youth unemployment reaches 60 percent and the citizen’s income has served no purpose with respect to labor policies, on the contrary, it has encouraged forms of undeclared work that accompany those who receive citizenship income. Each of us can tell stories of very small entrepreneurs, desperate for the lack of manpower because many say they prefer the DRC rather than embarking on a job ”. “On this I appeal to the dignity of the Sicilian people, of the boys in freeing themselves from the chains of welfare”.

What was your most important experience as Undersecretary of Defense? “As undersecretary I worked a lot on training and commitment on firm”. “Once the military path is over, they acquire professional skills that were not applied before”. And then, for Mulè “it was an extraordinary human experience, I experienced professionalism firsthand. They have the same ability to hold a child and a rifle in their arms for the missions they are called upon to accomplish. Many times they are Sicilian soldiers. This has been a source of pride, from Lithuania to Lebanon to Kuwait I have always found Sicilian soldiers who stand out for their professionalism ”.

Why vote for Giorgio Mulè? “First of all they must vote in order not to be able to say tomorrow that they are not happy, and with me they have the plastic certainty of being able to count on a representative of the territory, a Sicilian doc who knows Sicily and is able, thanks to the acquired credibility of being able to guarantee, everything a parliamentarian has to do for his land ”. Mulè future minister? “I do the conjurations, in the meantime future parliamentary. The rest will be seen for any positions of responsibility. In the meantime, let’s think about being elected, then let’s think about the rest ”. (by Elvira Terranova)