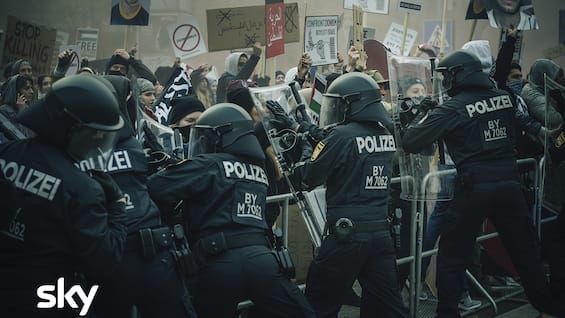 The nightmare of the ’72 Munich Games, which went down in history for the attack that led to the death of 11 Israeli athletes killed, kidnapped by a commando of the Palestinian terrorist organization Black September, relives today after 50 years in trailer of the new German thriller Sky Original MUNICH GAMESfrom the October 5th exclusively on Sky and streaming only on NOW.

Created and written by Michal Aviram, former author of the world cult Fauda, in six intense and tense episodes, the miniseries is set in Munich in 2022, which on the anniversary of the attack hosts a friendly with a high symbolic value, a football match between a team from Tel Aviv and a team local. The tension is very high, the implications and risks on a political level are even more so: the eyes of the world are on the game.

At the center of the story are the efforts of the two agents – one Israeli and the other German – who find themselves working together to thwart the threat of a new terrorist attack. The police and secret services of both sides are on high alert to ensure the safety of the event. However, when Oren Simon, a Berlin-based Mossad agent, intercepts a message on a dark web forum a few days before the game, he will be joined by Maria Köhler, an agent of the German State Criminal Police (LKA), of Lebanese origins, to avoid by any means that history repeats itself.

Geopolitics, information manipulation and the growing threat of extremism around the world: the miniseries tackles very topical issues by bringing to the small screen a product with a cinematic breath, starring the well-known faces of German cinema and TV Seyneb Saleh, Yousef Sweid, Sebastian Rudolph and Dov Glickman.

MUNICH GAMES is produced by Amusement Park Films, CBS Studios and Sky Studios. Martin Behnke is also on the script. Philipp Kadelbach (We, the guys from the Berlin zoo, Scent) directs all the episodes.