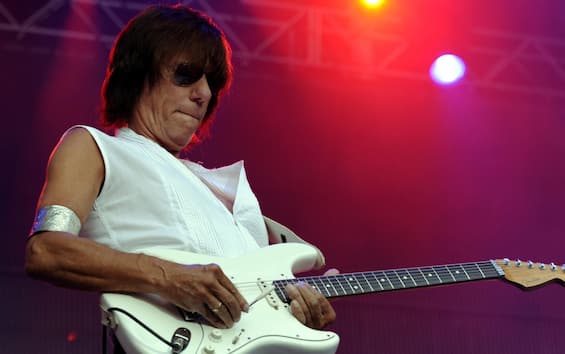 Legendary rock guitarist Jeff Beck, who recently recorded an album with Johnny Depp, has died at the age of 78 from a lethal form of bacterial meningitis. “On behalf of the family it is with great sadness that we announce the passing of Jeff,” announced the Twitter page of the British musician who became famous with the Yardbirds (where he had replaced Eric Clapton) and then in the group that bears his name with Rod Stewart. With his tone, physical presence and volume, Beck had redefined guitar music in the 1960s and influenced movements such as heavy metal, jazz rock and punk. Winner of six Grammys for Best Rock Instrumental Performance and another for Best Pop Instrumental Performance, Beck died in a hospital near his Surrey home.

By 1965, when he had joined the Yardbirds to replace Clapton, another ‘guitar hero’, the group was already at the heart of the growing electric blues movement in Britain. Three years later, he’d formed his own band with then-little-known Stewart and the equally obscure Ron Wood, later a Rolling Stones columnist. The group had debuted in 1968 with Truth which paved the way for another Yardbirds colleague, Jimmy Page, when he formed Led Zeppelin several months later. In 1974 Jeff embarked on a solo career: with the album Blow by blow he had shifted the balance of his influences from jazz to rock and funk. The record became a Billboard 5 and platinum hit.

In June Beck had begun to collaborate with Depp who considered him his mentor: after having trod a couple of stages in Great Britain once the legal battle with his ex-wife Amber Heard was over, the two had recorded an album, 18, to which the actor had contributed two original songs. Johnny and Jeff met in 2016 and soon realized they were soul mates. Beck had paid tribute to his friend: “I haven’t had another artistic partner like him in years. Depp was a creative force on this record and I hope people take him seriously as a musician”.

Among the many comments moved by the death of Jeff Beck, that of Carlo Verdone also arrived from Italy who wrote on Facebook: “The news of the death of Jeff Beck, one of the greatest guitarists on the face of the earth, fills me with The law of our short life must be accepted, but when a character disappears who was a point of reference in your youth with his ever-evolving music until his last album a few months ago, you get the idea of ​​a career that can still go on. I saw one of his memorable concerts in London and almost all those that Italy made. We are certainly sad but we must also be happy that life has given us this gift: him and his guitar – he continues – this his immense talent will be remembered and celebrated forever. We owe him so much. Humble, of few words, generous with his audience, he brought many young people closer to the electric guitar and the refined taste of true music. Thank you for all tto, great immense Jeff”.