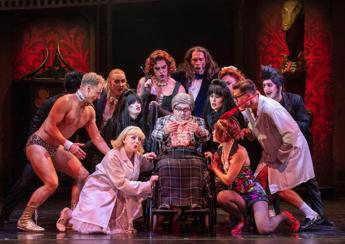 The legendary rock’n’roll musical by Richard O’Brien. After the October stages in Milan and Trieste, he arrives in Rome, at the Olympic Theater from 1 to 6 November for the season of the Roman Philharmonic Academy in collaboration with Lsd Edizioni, Rocky Horror Show. Among the most loved and applauded shows ever, one of the most daring musicals of the last fifty years, it has seduced entire generations of spectators with its transgressiveness, conquering even the most honest-minded people and transforming them into devoted fans with corsets and fishnet stockings.


Richard O’Brein’s wonderful creature has traveled to more than 30 countries, has been translated into more than 20 languages, and a film version was made in ’75 that became the most screened film in the history of cinema, including the main roles Tim Curry in the role of Frank, Susan Sarandon in Janet and O’Brien himself in Riff Raff. The musical returns to Italy under the direction of the English Christopher Luscombe, in a successful production already acclaimed all over the world. In the English cast we find Kristian Lavercombe, actor and singer who took part in more than 2000 reruns of the musical, “a fantastically talented Riff Raff” as O’Brien himself defined it. Face known to the public of Rocky Horror is also Haley Flaherty in the role of Janet, as well as the other main interpreters Stephen Webb (Frank), Richard Meek (Brad), Ben Westhead (Rocky), Suzie McAdam (Magenta), Darcy Finden (Columbia ). He joins them in the role of the Narrator Claudio “Greg” Gregori, a multifaceted artist who with an ironic, at times satirical style, ranges between music, cinema, radio, theater and TV. This is how he recounts his encounter with O’Brein’s musical: “The Rocky Horror Picture Show. I saw him, when he was twenty, back in 1983. It struck me a lot for the overwhelming charge of energy and explosive joy it was able to convey. It is a musical and therefore has all the affectation of the genre: it is excessive, didactic, linear and over the top, but it is really strong (…). Forty years later The Rocky Horror Show is still a cult and has a good reason for it. In this shattered, hypocritical, rigid and obtuse decade in which transgression is to apologize in a trashy way what was best done, this Opera still attacks with enthusiasm the gothic modesty of an unhealthy and bigoted status quo. Still amazes for the outrageous lyrics, for the winks and for the caustic jokes. It still flayes the sensitivity of the average man and yells at him that before you can judge something you have to live it ”.

The history of the Rocky Horror Show begins with a small theatrical production in London, written by Richard O’Brien to keep himself busy while looking for work as an actor. It was June 16, 1973, the place was a small experimental theater of only sixty seats, the Royal Court Theater Upstairs: “a monstrous web of crazy mutants, docile transvestites and muscular monsters …” (this is how the musical was described at the time), yes it was breaking into the London theatrical scene.

Expected six weeks of performances, from the first evening the success was such that a black market for tickets was soon created; the production then decided to move the show to the King’s Road Theater where it will continue to sell out until 1974, the date of the American debut.

A show that is renewed every evening, thanks to the active participation – the British call it audience participation – of all those fans who come to the theater with themed disguises, act, sing and dance, letting themselves be carried away by those timeless successes of Sweet Transvestite, Damn it Janet and Time Warp. The same production of the show offers anyone who wants it a manual entitled “The Virgins Guide” which can be viewed at this address: https://www.rockyhorror.co.uk/virginsguide