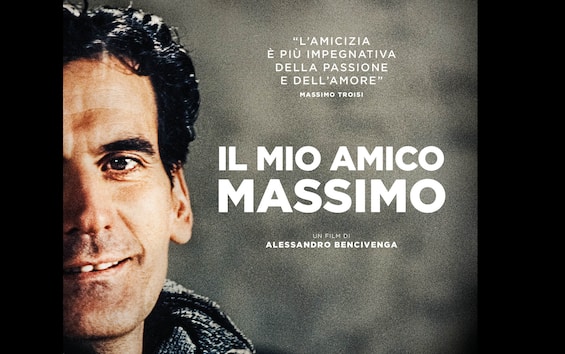 The official trailer is out My friend Maxthe eagerly awaited docufilm that traces the life and career of the late Neapolitan actor, Massimo Troisi.
The film, directed by Alessandro Bencivenga, is enriched by the narrative voices of Lello Arena and Cloris Brosca. It is expected on the big screen from December 15 to 21, distributed by Lucky Red.

The recently released video anticipates what we will see at the cinema, offering a first taste of this project: it will be an unusual and very emotional portrait, between irony and lightness, to take a journey through the life and career of a myth, a timeless myth, even if passed away prematurely due to a heart disorder.
My friend Max wants to retrace the artist’s life and career just as he would have liked to do: laughing and crying together.

The film will be released almost seventy years after the birth of Massimo Troisi, born on February 19, 1953 in San Giorgio a Cremano and died in Rome on June 4, 1994.
My friend Max it starts from Troisi’s cabaret performances, moving on to his theatrical experience and his first steps on the small screen. The docufilm is enriched with a lot of precious archival material, with his television interventions, his theatrical experiences, including vintage photos, backstage images and so on.
There is no shortage of words from many friends, family members and various very important exponents of the entertainment world, from Carlo Verdone to Nino Frassica, from Clarissa Burt to Maria Grazia Cucinotta, up to Ficarra and Picone, Pippo Baudo and Renzo Arbore.
“Massimo is seen through the eyes of all those like me who have had the good fortune to be inspired by his extraordinary intuitions as a man and as an artist”, says Lello Arena, one of Troisi’s closest friends, as well as having been a close collaborator of the economic actor. Arena lends his voice to the film, as the main narrator.

My friend Max is produced by Piano B productions, co-produced by Lambda and with associated producers Spaghetti Picture and Screen Studio. It is distributed theatrically by Lucky Red.

You can watch the official trailer of the documentary film My friend Max in the video that you find above, at the head of this article.

The participation of Gerardo Ferrara

The film is enriched by a very special participation: that of Gerardo Ferrara, Troisi’s stunt double for the film The postman (1994), as well as his great friend.

Director Bencivenga tells how the idea for the project came about: “One day, watching a film by Troisi, I thought: ‘It would be nice to make a documentary film about Massimo. After all, he was, and still is, my author, director and actor of reference’”, these are the words of Alessandro Bencivenga, director and screenwriter from Lazio (born in Formia, in the province of Latina). “I knew some friends of his, and what at the beginning was only a smoky idea was able to become a concrete reality. From there I began to dream up a story about Troisi, but in an unconventional way”, adds the director.

Great protagonist of this docufilm is also the soundtrack, a backbone of My friend Max.

The original music is signed by the singer-songwriter Giovanni Block, and some songs are arranged by Roberto Trenca. The sounds are inspired by Mediterranean atmospheres and suggestions, those that most characterize Troisi both in terms of film productions and for his personality.
There are the classical and acoustic guitars, the charango and the Greek bouzouki, instruments that manage to create dreamlike melodies, perfect to accompany you on this intimate and very delicate journey. Massimo’s most loved places are contemplated, the symbolic places of his life and his work, in a journey through the places but also in time, complete with dives piked backwards that even reach the period of the Grimace.

“I never like myself,” Massimo Troisi said of himself. “I am so self-critical that I do not commit suicide in order not to leave a note that would seem ridiculous to me”.
His irony and self-irony, his sarcasm and his vis comica made him one of the most interesting artists on the Italian panorama of the 1970s and 1980s. Unfortunately that was not the case with regard to the nineties because, as we know, Massimo Troisi passed away due to heart disease in 1994. He suffered from a heart condition and, after filming the The postman, found his death in his sleep, a few hours after the last take. He died on June 4, 1994 in Ostia, in the house of his sister Annamaria. He was only 41 years old and died of a heart attack following rheumatic fever.
Born on February 19, 1953 in San Giorgio a Cremano, just outside Naples, Massimo Troisi began his acting career in the late 1960s. He created the theater company Centro Teatro Spazio, which was joined by Enzo De Caro and Lello Arena. With them he then inaugurated La Smorfia, a theater group that landed on radio and television, enjoying enormous success.

From Non-stop (1977) a The slap (1978) up to Funfair (1979), there are many television programs in which the three take part. The trio’s last stage show was So it is (if you like)after which Massimo Troisi left La Smorfia to pursue a solo career, becoming one of the most popular film actors (and directors) in Italy.
He made his big screen debut in 1981, both as an actor and as a director, with the film I start again from three (1981).

His first film becomes a smashing success. Shot in just six weeks between Naples and Florence with a negligible budget, it was so successful that it beat blockbusters such as blockbusters at the box office Fantozzi against everyone And The empire strikes again. The consensus of the public is so strong that Troisi’s film remains on the bill in cinemas for 600 days. This first feature film of his was awarded two David di Donatello (for best film and best leading actor), four Silver Ribbons (best actor, emerging director, story and producer) and two Golden Grolle.
In 1982 he returned to the small screen as the protagonist of the Rai Tre TV special entitled Troisi dead, long live Troisi!. From Roberto Benigni to Carlo Verdone, from Lello Arena to Marco Messeri, there are many colleagues who participate in this show.
In the same year he starred together with Lello Arena in the film directed by Lodovico Gasparini, No thanks, coffee makes me nervous.

Sorry I’m late and We just have to cry

In 1983 he starred in the film Sorry for the delayfollowed a year later by We just have to cry. In the latter film he is joined as co-star and as co-director by Roberto Benigni. It’s 1984 and this crazy duo consecrates the highest-grossing film of the year, bringing almost 4 million spectators to Italian cinemas. Three years later Troisi directed the film The ways of the Lord are finished, the most viewed Italian film of 1987, the year of release. In 1988 he was directed by Ettore Scola in the film Splendor and in 1989 at What time is it?, with which he wins the Coppa Volpi at the Venice Film Festival together with Mastroianni. In 1990 he played Pulcinella in the film The voyage of Captain Fracassapresented at the Berlin Film Festival.

The last film he directed was The Postman

As for his directorial films, the last one was I thought it was love… instead it was a buggywritten, directed and interpreted by him in 1991. In the cast he is joined by Francesca Neri and Marco Messeri.
In 1994 he starred in the film The postmandirected by Michael Radford. Although he knew of the urgency of surgery due to his heart problems, Massimo Troisi still decided to proceed with the shooting of the film. These were concluded by him with a great effort, such an effort that many believe to have been one of the causes of his premature departure, which in fact occurred a few hours after the end of filming.

Of all the films by Massimo Troisi, The postman it is the most famous, both at home and internationally, as well as being the most awarded. He was nominated for five Academy Awards, including Best Actor for Troisi, winning the statuette for Luis Bacalov’s music. He won three Bafta Awards (for Best Foreign Film, Best Director and Best Music); it also won the National Board of Review’s Best Foreign Film Award. The postman was distributed by the Weinstein brothers’ Miramax. When it was released in 1994, it became the highest grossing film ever for a foreign film in the United States of America: overseas it grossed about 22 million dollars.

Massimo Troisi, since he left, has left behind a huge artistic void. In addition to an equally enormous and unfillable human void, as the forthcoming documentary film well explains.

You can watch the official trailer of the documentary filmMy friend Max in the video that you find above, at the head of this article.