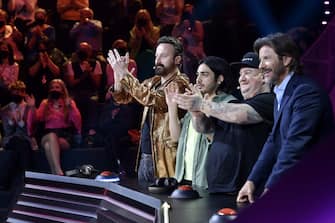 In the fifth episode of Name That Tune, the men’s team of VIPs saw Francesco Facchinetti, Paolo Conticini, Jake La Furia and Max Angioni challenge each other.

There was no shortage of twists in the fifth installment of the Name That Tune music program. In the photo, Francesco Facchinetti kisses the presenter Ciro Priello.

‘Name That Tune – Guess The Song’, the photos of the first episode

The fifth episode of Name That Thune, the musical program led by Ciro Priello and Fabio Balsamo of the artistic collective and videomaker The Jackal, saw Anna Tatangelo, Sabrina Salerno, Arisa and Syria compete against each other.

‘Name That Tune – Guess The Song’, the photos of the second episode

As always, the engines heat up with Playlist, in which competitors must guess the titles that make up the medley of themed songs, to win the first wild card

‘Name That Tune – Guess The Song’, the photos of the third episode

With the sympathy of The Jackal there is no shortage of hilarious rounds of the program, giving life to an edition full of surprises and comedy

‘Name That Tune – Guess The Song’, the photos of the fourth episode

After you’ve mimed the song titles, it’s time to dance to the music videos chosen by the hosts

The victory of the whole team depends on a single competitor, but he can ask for the help of his teammates by playing the jokers earned by the team during the whole race

The Lip Sync Duel is hilarious, in which one of the contestants has to move the lip in sync with the original video of the song.

The second heat, Headphones, reveals the understanding between the members of each team: three of them must in fact mimic the title of the song for their teammate to guess.

The protagonists of the episode of Name That Thune, the musical program conducted by Ciro Priello and Fabio Balsamo of the artistic collective and videomaker The Jackal