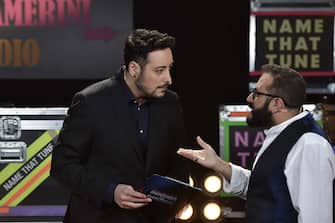 In this eagerly awaited edition, a great news to the management, with the arrival of Ciro Priello and Fabio Balsamo of the artistic collective and videomaker The Jackal.

Two teams made up of four VIPs each, coming from the world of music, entertainment and cinema, compete to the last note to the sound of songs and music. In the photo Iva Zanicchi, Sabrina Salerno, Michela Giraud and Mietta.

The gauntlet was thrown to Morgan, Riki, Pierpaolo Pretelli and Rocco Siffredi.

The best of Sky Uno

With the sympathy of The Jackal there is no shortage of hilarious rounds of the program, giving life to an edition full of surprises and comedy.

The engines heat up with Playlists, in which competitors must guess the titles that make up the medley of themed songs, to win the first wild card.

One of the proposed playlists is selected by Radio Deejay, the program’s media partner.

The second heat, Headphones, reveals the understanding between the members of each team: three of them must in fact mimic the title of the song for their teammate to guess.

Do not miss the challenge of the first episode, which takes place between Iva Zanicchi and Rocco Siffredi.

The race ends, as usual, with the highly anticipated Seven for Thirty, the challenge of challenges. 30 seconds available to guess seven songs, but recognizing it is not enough, you have to give the exact title of the song.

Only one competitor is played in this way for the victory of the whole team, but he can ask for the help of his teammates by playing the jokers earned by the team during the whole race.