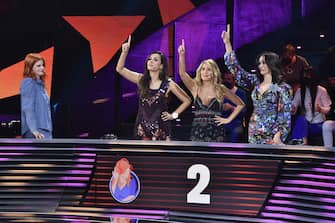 The second episode of Name That Thune, the musical program led by Ciro Priello and Fabio Balsamo of the artistic collective and videomaker The Jackal, saw Caterina Balivo, Jo Squillo, Maria Grazia Cucinotta and Chiara Galiazzo compete against each other.

The other team formed as always by Morgan, Riki, Rocco Siffredi and Pierpaolo Pretelli.

‘Name That Tune – Guess The Song’, the photos of the first episode

The singers of the men’s team mimic song titles for Morgan to guess.

Even the three VIP women mimic the titles of the songs for Jo Squillo to guess.

The first mysterious singer, discovered by the men’s team, is Riccardo Fogli.

The third mysterious singer is Shalpi who enters the studio transmitting a great energy.

On the notes of Rockin’n’rollin ‘Scialpi, the third mysterious singer, he enters the studio of Name That Tune.

With the sympathy of The Jackal there is no shortage of hilarious rounds of the program, giving life to an edition full of surprises and comedy.

The team of Morgan, Riki, Pierpaolo Pretelli and Rocco Siffredi.

The race ends, as usual, with the highly anticipated Seven for Thirty, the challenge of challenges. 30 seconds available to guess seven songs, but recognizing it is not enough, you have to give the exact title of the song.

Only one competitor is played in this way for the victory of the whole team, but he can ask for the help of his teammates by playing the jokers earned by the team during the whole race.