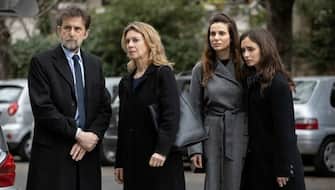 An artist who in his long career has offered a peculiar point of view on reality, with films that have entered the collective imagination becoming true cult. Nanni Moretti turns 69 on 19 August 2021, to be celebrated by retracing her path through the most representative films. Let’s start from the end: the last film is “Three floors”, from the novel by Eshkol Nevo, with Margherita Buy, Riccardo Scamarcio, Alba Rohrwacher and Moretti himself who plays a judge. It was in competition at the Cannes Film Festival

Nanni Moretti is currently working on a new film that marks the director’s return to CInecittà. The film is called Il Sol dell’Avvenire. Protagonist is the French movie star Mathieu Amalric. The rest of the cast is made up of Margherita Buy and Silvio Orlando, with Barbora Bobulova, Nanni himself, Elena Lietti, Jerzy Stuhr, Laura Nardi, Beniamino Marcone, Rosario Lisma, Flavio Furno, Francesco Brandi

His directorial debut dates back to 1976 with “Io sono un autarchico”, played by the director himself

Moretti on a Vespa: the video on Instagram compared with the scene from “Caro Diario”

Two years later, one of Nanni Moretti’s most famous films arrives: “Ecce bombo”, a heated satire of the post-1968 generation. The title deliberately and in a macaronic way takes up the biblical expression “Ecce homo”

Coronavirus, Nanni Moretti and the empty cinema: the photo on Instagram

In 1981 “Sogni d’oro” was released: it is the story of Michele Apicella, played by Moretti himself, a director frustrated by the sense of misunderstanding he perceives around his work

Comedy and sentimentality characterize “Bianca”, the 1984 film, the fourth in the director’s production. In the cast also Laura Morante

A year later “La Messa è Finita” was released in theaters, which was awarded the Silver Bear at the Berlin Film Festival. After the first four films set to music by Franco Piersanti, this film marks the first collaboration with Nicola Piovani

1989 is the year of “Palombella rossa”, which tells of the identity crisis of the Italian left, a political party that Moretti has always observed carefully, not sparing even severe criticism.

In 1993, however, “Caro diario” was released, which received, among other awards, the prize for best director at the Cannes Film Festival. It is a three-episode film in which Moretti tells himself as in a diary

In 2006 it was the turn of “Il caimano”, a “metacinema” work that tells the protagonist’s desire to make a film about the life of Silvio Berlusconi

In 2011 Moretti made “Habemus papam”, a comedy about the dynamics and the background of the election of a Pontiff in a conclave

In 2015, however, “My mother” dates back to the difficult period of a successful director due to the precarious health conditions of his mother. Among the actors of the film is Margherita Buy. In 2021, his new film, “Three floors”, whose distribution was conditioned by the Coronavirus emergency, should finally be released in theaters

From Moretti to Martone, 20 01 Distribution titles to return to theaters

But Moretti didn’t just work behind the camera. In addition to being among the protagonists of practically all of his films, he starred, after his debut in “Padre padrone” in 1977, in “Domani accadrà” in 1988 by Daniele Luchetti

The partnership with Luchetti continued in 1991 with “Il portaborse”

On the other hand, one of Moretti’s most famous films as an actor dates back to 2009: “Calm chaos” with Isabella Ferrari

Nanni Moretti and Margherita Buy on the set of “Three floors”