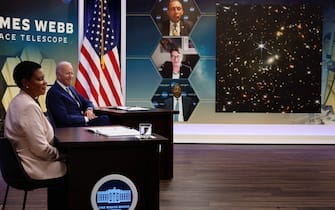 NASA, in the presence of US President Joe Biden and deputy Kamala Harris, unveiled the first images taken from the James Webb telescope. “It’s a historic day,” Biden commented. “A historic moment for science and technology, for astronomy and space exploration. But also for America and all of humanity,” he tweeted shortly after. president

WATCH THE VIDEO: Space, show the first images of the Webb telescope

The very first diffuse image shows the SMAC S 0723 galaxy cluster. The combined mass of this galaxy cluster acts as a gravitational lens, magnifying galaxies much further away behind it.

Another image shows the planetary nebula cataloged as NGC 3132 and informally known as the Southern Ring Nebula, captured by two cameras aboard the James Webb telescope. The dimmer star in the center has been emitting rings of gas and dust for thousands of years in all directions, and NASA’s Space Telescope has revealed for the first time that this star is cloaked in dust. It is about 2,500 light years away (Credits: NASA, ESA, CSA and STScI)

Space, the James Webb telescope hit by a micrometeorite in June

One of the photos made available by NASA shows the edge of a nearby and young region of star formation called NGC 3324 in the Carina Nebula, captured in infrared light by the new James Webb Space Telescope (Credits: NASA, ESA, CSA and STScI)

In this photo provided by NASA, the James Webb Space Telescope reveals it “Stephan’s Quintet”, a visual grouping of five galaxies. This huge mosaic is Webb’s largest image to date, covering roughly one-fifth the diameter of the moons. It contains over 150 million pixels and is made up of nearly 1,000 separate image files. (Credits: NASA, ESA, CSA and STScI via Getty Images)

10 years ago the discovery of the Higgs boson at Cern: what is the “God particle”