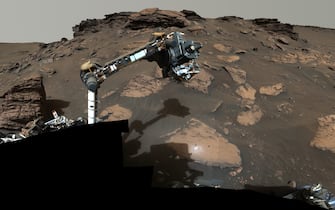 The rover Perseverance NASA found on the surface of Mars rocks they contain organic molecules and which, according to experts from the American space agency, could be “a possible one signature of life “

WATCH THE VIDEO: Perseverance records the sound of the wind from Mars

The molecules could be “traceable” to a substance or structure that could testify to the existence of a life spent on the red planetbut that could also have been produced without life, “explained the leaders of the mission at an online press conference

Organic molecules, found by the Perseverance rover in Jezero crater he has been exploring for a year, they are not biological molecules, but they include a variety of compounds: above all carbon, hydrogen And oxygenbut also nitrogen, phosphorus And sulfur

The first meters traveled by the Perseverance rover on Mars. VIDEO

It is therefore a question of precursor moleculespossible building blocks of biological molecules, but not necessarily such

The panoramic photo taken by Perseverance on Mars

The experts of the Jet Propulsion Laboratory (Jpl) of NASA, responsible for the activity of the Perseverance rover, specify that such molecules can be produced by chemical processes which do not imply the presence of life

The images of Perseverance’s landing on Mars. VIDEO

The rocks that contain organic molecules are four and are part of the 12 so far collected by the NASA rover in its first year of activity on Mars, in the Jezero crater, and destined to be brought to Earth in the future, from the mission Mars Sample Return (Mrs)which is scheduled to launch in 2027, said Lori Glaze, director of NASA’s division of planetary sciences

Perseverance is landed on Mars on February 18, 2021, with the aim of searching traces of past life and collect the first samples of the Martian soil

Perseverance is the fifth NASA rover to move its wheels on Mars, after Sojourner arrived in 1997 with the Mars Pathfinder mission and which ran less than three months, the twin rovers Spirit and Opportunity – the Mars Exploration Rover mission arrived in January 2014 and active respectively for six and almost 15 years – e Curiositywhich arrived with the Mars Science Laboratory mission on 6 August 2012 and is still active