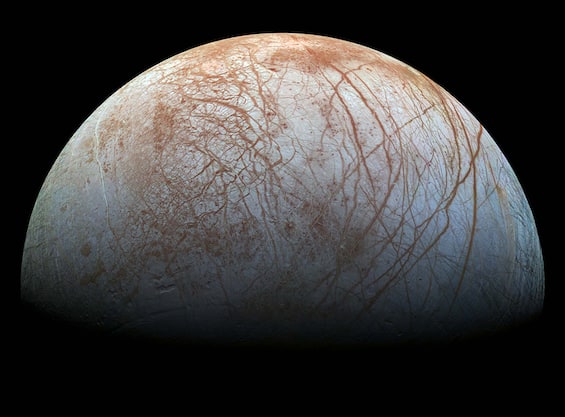 The first close-up image in more than 20 years of Europa, one of Jupiter’s moons, was sent by NASA’s Juno probe. The spacecraft, starting at 11:36 am Italian time on Thursday 29 September, made an overflight just 352 kilometers from the surface of the frozen moon. The Juno spacecraft had just two hours to collect data as it sped near the surface of Europa at a relative speed of about 23.6 kilometers per second.

“It’s still early days to tell, but all the evidence points to the close shift being a great success,” said Scott Bolton, Juno’s chief scientist at the Southwest Research Institute in San Antonio, Texas. “This image is just a glimpse of the amazing new science that will come from Juno’s entire suite of instruments and sensors.” During the flyby, the spacecraft took several very high resolution (1 kilometer per pixel) images of Jupiter’s moon, capturing the details of its wrinkled icy ‘skin’ as well as valuable information on its composition and interaction with Jupiter’s magnetosphere. . The images will be compared with those of previous missions (Voyager 2 and Galileo) to verify if the surface of Europa has changed in the last decades.

Useful data for the next mission

“The images taken with the JunoCam will allow us to complete the current geological map, replacing the old low-resolution images,” says Candy Hansen of the Planetary Science Institute in Tucson, Arizona. The images along with data collected with the MWR (Microwave Radiometer) instrument will provide further details on how the structure of Europa’s ice changes under its crust: this will help scientists search for ‘pockets’ that may contain liquid water. These data and those collected from previous missions will be particularly useful for Clipper, the next NASA mission destined to arrive on Europe in 2030 to study its atmosphere, surface, internal structure and habitability.