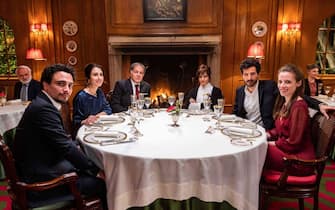 The 2022 edition of 2022 Series Large Silver Ribbons acknowledged a At home everyone is fine – The Series by Gabriele Muccino, broadcast on TV on Sky and streaming on NOW, the award as Best Series of the 2021-2022 season. The recognition also went to The ignorant fairies by Ferzan Özpetek

WATCH THE VIDEO: At Casa Tutti bene, trailer of the Gabriele Muccino series

The ignorant fairies by Ferzan Özpetek and Gianluca Mazzella broadcast on Disney + and also visible on Sky Q and via the app on Now Smart Stick, is the winner of the Ribbon for the Best series. The jurors took into consideration all the titles of the 2021-22 season that had aired by last April 30th

The ignorant fairies, everything you need to know about the TV series

A Zerocalcare, author of Tear off along the edges (broadcast on Netflix and also visible on Sky Q and via the app on Now Smart Stick), the Ribbon of the Year for the most innovative series went

Tear along the edges, Zerocalcare: “Second season? If I can survive”

TO Carlo Verdoneprotagonist and co-author of Life as a Carlo (broadcast on Prime Video and also visible on Sky Q and via the app on Now Smart Stick), the Nastro Speciale Original was recognized, assigned to the most voted title among the “original series”

The bastards of Pizzofalcone 3, the cast of the series

DOC – In your hands with Luca Argentero (Lux Vide production, Rai Fiction and Matilde and Luca Bernabei), he won the Nastro for Best “Dramedy” Series

From Muccino to Verdone, the candidates for the Nastri d’Argento 2022 for the great TV series

“Yara”, the film by Marco Tullio Giordana streaming on Netflix

Who is Maria Chiara Giannetta: 21 curiosities about the actress

For the Supporting Actress category, the Nastro d’Argento 2022 Grandi Serie goes to Ambra Angiolini and Monica Guerritorerespectively for The ignorant fairies And Life as a Carlo

TO Studio Battagliamore precisely to the author Lisa Nur Sultan and her entire female cast, a special tape goes