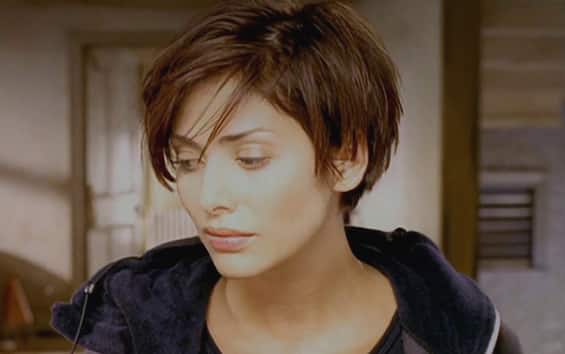 Natalie Imbruglia confesses, revealing for the first time so many things she had never told. She does it during an interview with theIndependent on the occasion of the 25th anniversary of his debut album, Left of the Middle. That record will turn a quarter of a century next November, which is why the singer made famous by the single it contains (the famous song Torn) takes the floor. And she recalls the past.
Imbruglia talked about those days, recounting the difficult transition she experienced, the one that led her to establish herself in pop from the world of soap opera.
Before becoming a star of the seven notes, in fact, she was an actress, engaged on the set of the Australian series Neighbors (the same where Kylie Minogue worked).

Natalie Imbruglia, Australian like her colleague Minogue, opened up in a confession-river in which she tells how she overcame the so-called “one-hit wonder” complex due to the single Torn (which is also a cover, for the uninitiated. And Imbruglia herself in the interview also touches on this point: the wide eyes of anyone who discovers that no, Torn it’s not her song, they hurt her a lot).

Imbruglia: “At the time I suffered from dysmorphophobia”

Among the most particular revelations, there is the one concerning his dysmorphophobia: the star revealed that in the nineties he suffered from a disorder for which he did not want to show his physical forms. For this reason she always dressed in loose clothes, often of an androgynous style, however not very feminine and far from sexy. Even for the video clip of Torn she wore such an outfit, even if the result was unpredictable: it was immediately cool and trendy.

In the video clip for the song, directed by Alison Maclean and shot in an apartment recreated on the set, Natalie Imbruglia wears a pair of baggy pants and a hoodie over a T-shirt. It is because «at the time I suffered from dysmorphophobia and was insecure. Military pants weren’t cool or trendy either. I dressed like this so as not to show my shapes, I didn’t want anyone to see what I was like “, she explained to theIndependent.
However, no one at the time thought that that choice of clothing concealed some kind of insecurity, indeed. The pairing of casual trousers and sweatshirt was considered, vice versa, as “a form of androgynous coolness, even if the truth is that I put myself down like this because I didn’t want to wear a dress”, adds the star.

He also suffered from the impostor syndrome

Natalie Imbruglia at that time was not doing well at all: in addition to the dysmorphophobic disorder, she was also unsure of her artistic and professional skills, which she doubted to the point of suffering from the impostor syndrome.
“By attending the stages I had become an experienced entertainer, but it seemed like very little compared to what I was trying to do as an artist. And so I couldn’t put these two things together in my head, ”said Imbruglia.
She believed she had no talent and had only been blessed with blatant luck. If you are already convinced that you are not that good and you become a world star thanks to a song that is not really yours but is a cover, then the impostor syndrome becomes almost impossible to eradicate …

Torn, an immense fortune made on a cover

The song of Nataglie Imbruglia, Torn, it’s not Natalie Imbruglia’s song. This is the assumption.

Well yes: it is a cover, a remake of a piece originally sung in Danish. The title is Brændt and the song is by Lis Sørensen, released in 1993 and then the following year in English. But if you think that the first English language version released the following year is that of Natalie Imbruglia, you are wrong.
The first to sing the song in English were the Americans Ednaswap, after which the Norwegian Trine Rein joined the choir (at the end of this article you will find all the various versions).

“People are obsessed” with the fact that he launched his career with a cover. «But an artist is above all a communicator (…) and certain songs go well with the person. People connect with my truth, the way I relate to the text and how I communicate it in an authentic way ».
It’s not that Natalie cheats (pass us this pun): the singer never let it through Torn by the flour of his sack, indeed. But many fans perhaps did not want to believe that that song was not of him. And in fact, even when you discover a cover, after a few weeks you forget it (try to believe: come back here in a couple of weeks and the amazement will be the same as what you feel now). Because Torn is Natalie Imbruglia.

Below you will find all the various versions of Tornstarting from the Danish original by Lis Sørensen, passing through the first English version by the Americans Ednaswap (in this band two of the authors of Torn, Scott Cutler and Anne Preven. Instead the third, Phil Thornalley, who briefly played with the Cure). We then move on to that of the Norwegian Trine Rein, who remade the piece in 1996.
Finally, to arrive at the hit that consecrated Natalie Imbruglia to a legend, “her” Torn precisely.