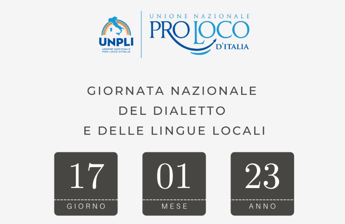 Readings, theatrical performances and even exhibitions: these are just some of the activities promoted by the Pro Loco on the occasion of the “National Day of Dialect and Local Languages” which is celebrated, like every year, on January 17th. Also scheduled are exhibitions of cartoons, poetry recitals and performances in typical costumes; there are also many activities promoted by schools. The “National Day of Dialect and Local Languages” is carried out in full harmony with the Unesco directives with which Unpli has been accredited since 2012, within the framework of the Convention for the protection of intangible cultural heritage; the initiative was established in 2013 by theNational Union of Pro Loco with the aim of making local institutions and communities aware of the protection and enhancement of these intangible cultural heritages.

The program of events promoted by the Pro Loco, with the coordination of Unpli and, in some cases, with the collaboration of associations, study centres, Municipalities, educational institutions, is constantly updated and is available on the Unpli.info portal. “The National Day of Dialect and Local Languages ​​is part of the broader action launched by Unpli for the protection and safeguarding of intangible cultural heritage. Every single expression in dialect is a vehicle of the knowledge and traditions of our territories. Dialects and local languages ​​are therefore indispensable for the transmission of these cultural heritages between generations” affirms the president of Unpli, Antonino La Spina.

It is possible to participate in the “National day of dialect and local languages” even just by writing a post on social networks (Facebook, Twitter and Instagram) by inserting the hashtags, #dialectday and #sayindialect. In this edition, in addition to organizing an event and posting phrases in dialect or local language on social networks, it is possible to send a message saying the following phrase in dialect: “Let’s save our dialect! Help us too! Greetings from (Municipality) (Region)”. Contributions can be sent via WhatsApp (to the number +39 3515495460) or by e-mail ([email protected]) and the best ones will be published on our social pages.