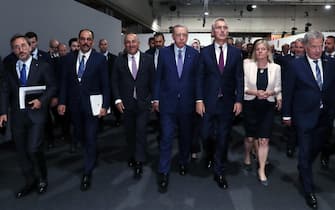 On the eve of NATO summit in Madrid that starts today, Turkey, Sweden and Finland they signed a memorandum which led Ankara to withdraw the veto on the entrance of the two Nordic countries in the Alliance. At the summit the Turkish President Recep Tayyip Erdogan, the Finnish counterpart Sauli Niinisto, the Swedish Prime Minister Magdalena Andersson and the Secretary General of the Atlantic Alliance Jens Stoltenberg. Here’s what they are the key points of the agreement, according to what Turkish diplomatic sources told theAgi

Full cooperation of Sweden and Finland with Turkey in the fight against the PKK and its affiliates, but also solidarity of the two countries towards Ankara in the fight against terrorism in all its forms and manifestations. (In the photo Recep Tayyip Erdogan and Jens Stoltenberg in Madrid)

Born, Turkey withdraws its veto on the entry of Sweden and Finland into the Alliance

Commitment not to support Pyd / Ypg and Feto (i.e. the organization of Fetullah Gulen, in the picture)

NATO Summit in Madrid: the participating countries and the agenda

Avoid the embargo restrictions in the field of the defenceincreasing cooperation. (In the photo the meeting in Madrid between Erdogan, the Finnish counterpart Sauli Niinisto, the Swedish Prime Minister Magdalena Andersson and Jens Stoltenberg)

Sweden and Finland in NATO: what would change at the military level

Ukrainian war, how the position of some neutral countries has changed

Establishment of a mechanism structured cooperation on sharing intelligence in the fight against terrorism and organized crime. (In the photo the participants of the summit in Madrid between Turkey, Sweden and Finland)

Adoption of concrete measures on the extradition of wanted for terrorism and stipulation of bilateral contractual agreements. (In the photo the summit in Madrid between Turkey, Sweden and Finland)

Prohibition of the activities of fundraising and PKK recruitment and affiliated organizations and prohibition of terrorist propaganda against Turkey. (In the photo Erdogan and Magdalena Andersson at the Madrid summit)

Support for wider participation of Finland and Sweden in the EU security mechanismsincluding the Pesko (EU permanent structured cooperation process). (In the photo Erdogan and Stoltenberg in Madrid)

Establishment of a permanent joint mechanism with the participation of the institutions of justice, intelligence and security to oversee the implementation of these points. (In the photo Erdogan and Stoltenberg in Madrid)